The Darkest Knight Yet? Robert Pattinson's Full Look In Batsuit And Batmobile

Like actor Jeffrey Wright, cast as Commissioner Gordon in The Batman, said: "Wait 'til you hear it." 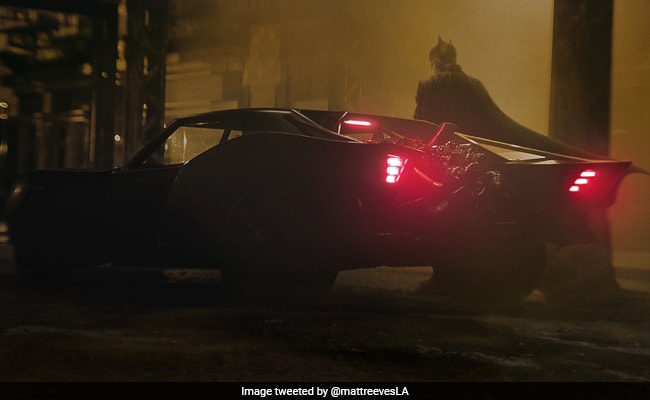 We were still in awe of the Robert Pattinson's brooding first look as The Batman when director Matt Reeves unleashed the new Batmobile on Twitter. Cherry on top is the new Bruce Wayne's complete look in the Batsuit. Netizens lost their mind and almost instantly started debating over the new, edgier looking Batmobile - some are actually disappointed over Batman's signature vehicle looking like an amped up version of a sports car as opposed to the futuristic, shielded kind of a mean machine as seen in Christopher Nolan's Batman films and Zack Snyder's Batman v Superman. Thanks to old-school Batman fans, who reminded folks on Twitter that Robert Pattinson's all-black ride is actually more relatable to the Batmobile seen in Batman comics of the 70s and 80s. In fact, this new Bruce Wayne's Batmobile looks like a modern spin to what Adam West rode around Gotham City almost four decades ago. Adam West played the caped crusader in Batman TV series in the sixties.

Be ready to be blown away. Like actor Jeffrey Wright, cast as Commissioner Gordon in The Batman, said: "Wait 'til you hear it."

Wait 'til you hear it.

Just a glimpse of the Batmobile argument on Twitter here. Those is favour of the new one easily outnumbered the displeased fans.

I'm just annoyed at how much hell yall gave Zack and Ben for making a BEAST of a Batman and a powerful Batmobile, but you'll gush over this Adam West mask & Fast Furious car.

Matt Reeves out here exposing all the so called Batman "fans"

OMG, so many ignorant people. pic.twitter.com/puElACOqAm

"this isn't the batmobile, this is just a car"

Meanwhile, the batmobile from the comics: pic.twitter.com/kAS6Dp8nb4

Personally I think the new Batmobile is a really bold choice pic.twitter.com/n58ujoQL0p

So glad to finally have a Batmobile that's not a tank for once. #TheBatmanpic.twitter.com/MInd1yvCuB

Yup it's official this is the best batsuit and best batmobile I don't care what you guys say. #TheBatmanpic.twitter.com/PImgGFwqUZ

A modernized version of the Adam West Batmobile! https://t.co/R4xCLl8rm1

Robert Pattinson is the new addition in the long list of actors who played Gotham City's Dark Knight before, including the likes of Ben Affleck, Christian Bale, Michael Keaton, Val Kilmer and George Clooney. Matt Reeves dropped the first look with a dramatic look test video in February.

However, not much about the storyline of The Batman has been revealed yet. However, it is said that Bruce Wayne will reportedly feature in a much younger persona and the film will have a slew of villains like The Penguin and The Riddler. Matt Reeves revealed in previous interviews that his film will focus on Batman's identity as the "world's best detective." The ensemble cast of the film also includes Zoe Kravitz as Catwoman, Paul Dano as The Riddler, John Turturro as Carmine Falcone, Peter Sarsgaard as Gil Colson, Jayme Lawson as Bella Real, Andy Serkis as Alfred Pennyworth and Colin Farrell as The Penguin.