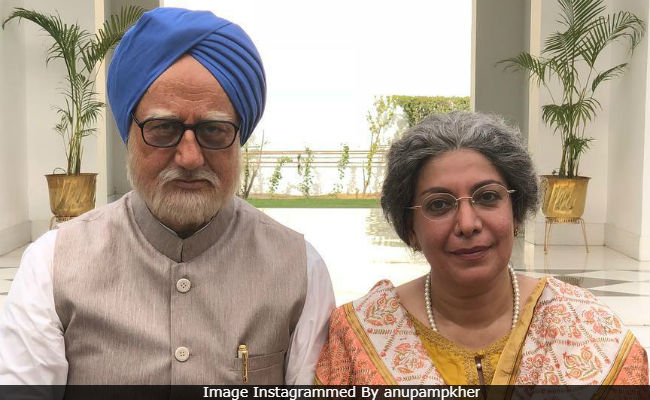 Introducing the very talented @divyasethshah. She portrays the character of Mrs. Gursharan Kaur, wife of honourable ex-Prime Minister of India #DoctorManmohanSinghJi in the movie #TheAccidentalPrimeMinister. @tapmofficial

Happy to share my first look of #DrManmohanSingh, India's Former Prime Minister from the movie #TheAccidentalPrimeMinister directed by #VijayRatnakarGutte & produced by #BohraBrothers. Creative producer is @mehtahansal. Film is based on #SanjayBaru's book with the same title. #FilmReleasing21StDec

The Actor.... The Character.... #TheAccidentalPrimeMinister

Also, a video of Anupam Kher walking like Manmohan Singh on the sets of the film in UK had went crazy viral a couple of months ago. "I was amused that this clip was sent to me by various people. Obviouslym, someone captured it and posted it while I was rehearsing. It is from our shoot of The Accidental Prime Minister in Skipton, UK," he Instagrammed.

I was amused that this clip was sent to me by various people. Obviously someone captured it & posted it while I was rehearsing. It is from our shoot of #TheAccidentalPrimeMinister in Skipton, UK. So instead of you finding it on various platforms I am happy to share it with you all myself. #AnActorPrepares #PowerOfSocialMedia

Promoted
Listen to the latest songs, only on JioSaavn.com
The writing credits for The Accidental Prime Minister goes to National Award-winning filmmaker Hansal Mehta. The film is directed by Vijay Ratnakar Gutte.

The Accidental Prime Minister also stars Akshaye Khanna and is slated to release on December 21.