"If there is one thing, we have learnt in this pandemic, it is the importance of physical and mental well-being," wrote Neetu Kapoor 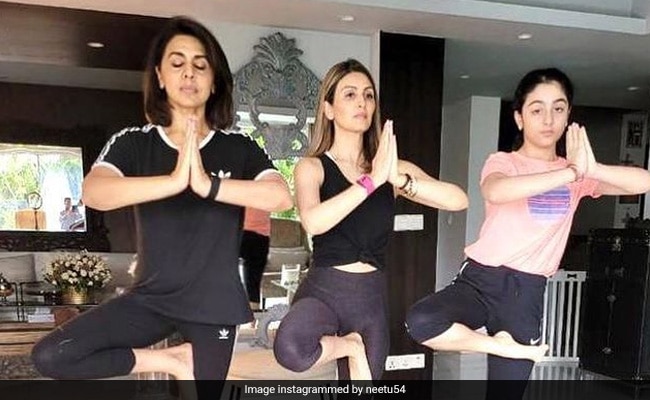 Neetu Kapoor and family took the International Yoga Day celebrations to a different level altogether. The veteran actress, 62, shared a set of pictures, in which she can be seen doing yoga with her daughter and jewelry designer Riddhima Kapoor Sahni, 40.The pictures and videos also feature Neetu Kapoor's granddaughter Samara, who is 10. "If there is one thing, we have learnt in this pandemic, it is the importance of physical and mental well-being. And working towards health goals have never been so relevant," wrote Neetu Kapoor.

She added in her note: "Hence, it is no surprise, the theme of this year's, International Yoga Day 2021, is 'Yoga at Home and Yoga with Family'. To celebrate Yoga's holistic approach and to promote physical and mental health, but within constraints of social distancing, we practiced yoga, as a family - Three generations together today." She signed off her post with these words: "We wish you a happy world yoga day."

Neetu Kapoor was married to actor Rishi Kapoor, who died in Mumbai on April 30, last year after battling cancer for two years. He was 67. Riddhima Kapoor Sahni, who is a Delhi-based jewelry designer, has been staying with her mother in Mumbai since then. Neetu and Rishi Kapoor's son Ranbir is also a successful Bollywood actor. Neetu Kapoor's next project Jug Jugg Jeeyo, co-starring Anil Kapoor, Kiara Advani, Varun Dhawan and content creator-actor) Prajakta Koli. The film has been backed by Karan Johar's Dharma Productions and it has been directed by Raj Mehta.

The "Urgent" Messages Tahira Kashyap's Kids Send Her When She's At Work. ROFL