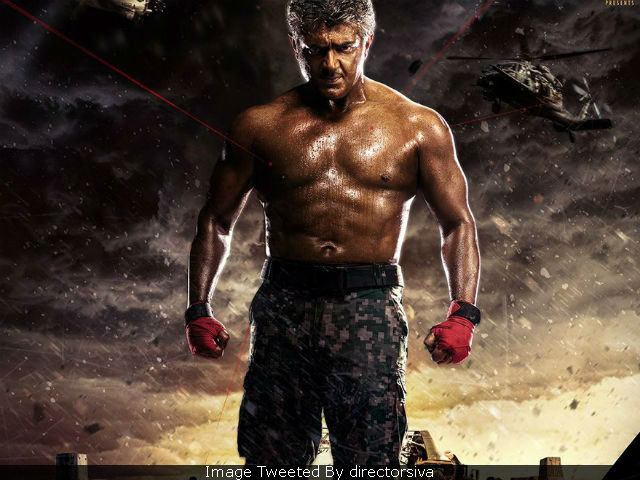 New Delhi: The first look of Ajith Kumar's Vivegam, popularly known as Thala 57, was unveiled on Thursday. The poster features the fearsome side of Ajith in six-packs surrounded by soldiers and choppers. The tagline of the poster reads: "Believe in yourself." The 45-year-old actor stars as an Interpol officer in Vivegam, which is one of the most-anticipated Tamil films of the year. The team is currently wrapping up the remaining portions of the film, helmed by Siva. Vivegam will be Ajith and Siva's third film together after Veeram and Vedalam. Both the films were successful at the box office. Here's the first look of Ajith's Vivegam:

Vivegam also stars Kajal Aggarwal and Akshara Haasan in pivotal roles while Bollywood actor Vivek Oberoi will be introduced as the prime antagonist. Vivek too shared the poster of the film and appreciated Ajith's transformation. He wrote: "And here's the English version #Vivegam ! Ajith anna's phenomenal transformation! So inspiring! #Thala57FirstLook"

The film is shot across key locations in Europe and Bulagria. Akshara had previously tweeted about shooting for Vivegam in Bulgaria.

She also shared a picture of Ajith performing bike-stunts.

The fire in the belly still burns so bright. Keep shining sir. #ak57pic.twitter.com/fHbcwRdvgi

Promoted
Listen to the latest songs, only on JioSaavn.com
Anirudh Ravichander will compose the music for Vivegam. He is collaborating with Ajith for the second time after the success of Vedalam. Anirudh told Indian Express, "After Vedalam, the expectation of the audience from our team is really high. And we are trying to live up to it. Thala 57 is a different premise, It will be stylish like a James Bond film. So obviously the music will also be new and different."

Produced under Sathya Jyothi Films banner, the Vivegam will release in June.