With a non-fussy makeup look and wet hair, the actress will make your heart skip a beat 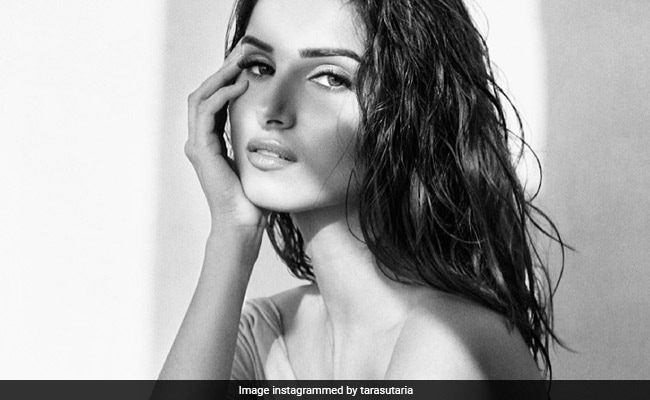 Tara Sutaria is a stunner. And, her Instagram timeline says it all. This time around, the actress uploaded a monochromatic photo of herself, leaving fans asking for more. With a non-fussy makeup look and wet hair, the actress made our hearts skip a beat. Along with the snap, Tara wrote, "Picture me upon your knee, with tea for two and two for tea #DorisDay#50sBaby" and some emojis. The caption is a line from the 1950's song Tea For Two by the American songstress Doris Day.

Tara has earlier declared that she is a fan of the black-and-white era. So, it came as no surprise that she chose to caption her image with a song from the 50s and described herself as a "50s baby".

The old-world charm struck a chord with fans who used words like "beautiful" and "mesmerizing" to describe her and flooded the comment section with heart emojis. Tara's rumoured beau actor Aadar Jain also left a heart emoji on the post. Tara and Aadar often leave cute comments on each other's social media posts.

While Aadar is gearing up for the release of his film Hello Charlie on April 9, Tara will be seen next in Milan Luthria's Tadap.

Actor Suniel Shetty's son Ahan Shetty will be making his debut opposite Tara in the movie. Tara will also share the screen space with Aditya Roy Kapoor and John Abraham in Ek Villain 2. It is a sequel to the 2013 blockbuster Ek Villain, which featured Sidharth Malhotra and Shraddha Kapoor.