"It's finally here..." Tara Sutaria wrote in her Instagram story 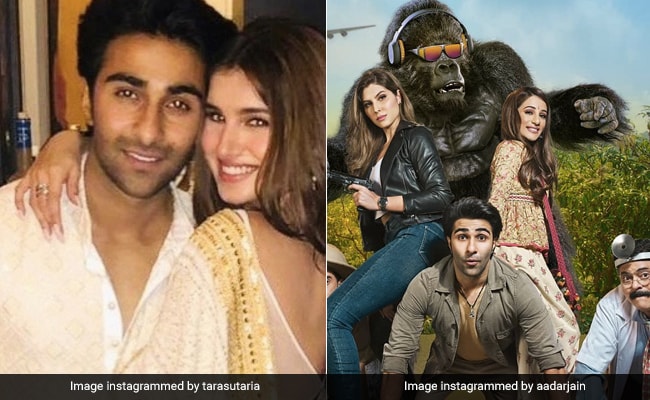 It's a big day for actor Aadar Jain as the trailer of his upcoming film Hello Charlie released on Monday. Aadar's rumoured girlfriend and actress Tara Sutaria has made his day even better. Tara gave a shout-out to Aadar for the movie and acknowledged its trailer on Instagram. The Marjaavaan actress shared the trailer of Hello Charlie in her Instagram story. Tara tagged Aadar along with his co-star Shloka Pandit in the post and wrote, "It's finally here. #HelloCharlie trailer out now." She also added a few heart emojis in her Insta story. 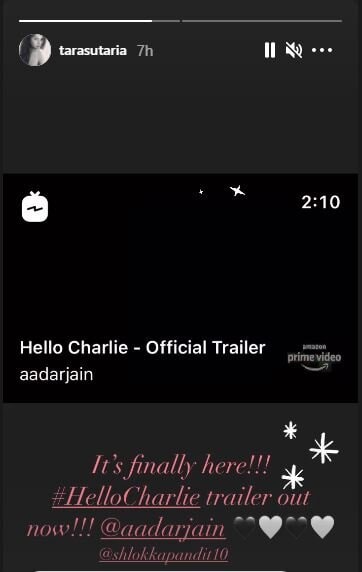 Aadar attended the trailer launch of Hello Charlie along with his co-stars Jackie Shroff, Shloka Pandit, Elnaaz Norouzi and producer Ritesh Sidhwani today. Aadar posted a few pictures from the trailer launch on Instagram. The first photo in the series features Aadar with Jackie, Shloka, Elnaaz and Ritesh. The second picture is of Aadar and Jackie posing together for the cameras. Aadar wrote, "Gangs all here #HelloCharlie."

Speaking of Tara, the actress is rumoured to be dating Aadar Jain. The couple is often spotted together in public. They keep showering love on each other on their respective social media handles. Aadar is actors Ranbir Kapoor, Kareena Kapoor, and Karisma Kapoor's cousin. He is the son of Rima Jain (Raj Kapoor's daughter) and Manoj Jain. Armaan Jain is Aadar's elder brother.

Aadar Jain made his Bollywood debut with Qaidi Band in 2017. He worked as a trainee assistant director in the 2016 film Ae Dil Hai Mushkil and acted in the movie Khel Khel Mein.

Tara Sutaria will next be seen in Tadap, Ek Villain Returns and Heropanti 2 Her latest film Marjaavaan released in 2019.

Coming back to Hello Charlie, the film will premiere on Amazon Prime Video from April 9. The movie is directed by Pankaj Saraswat. Ritesh Sidhwani and Farhan Akhtar have produced it.