Tanushree asked why should women, who have the courage to speak out about harassment, "stigmatised by society"? 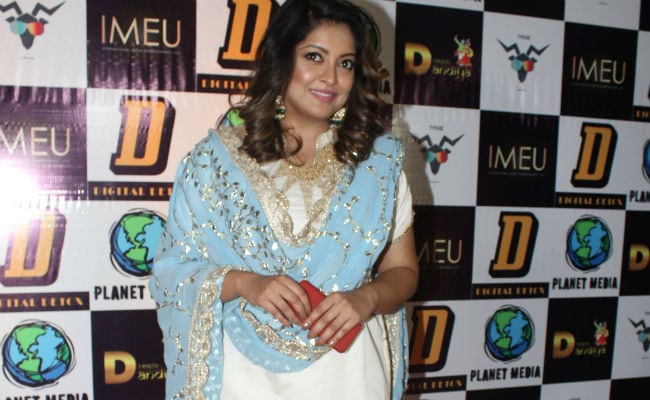 Tanushree Dutta at a Navratri event in Mumbai.

Tanushree Dutta's appearance at a dandiya event this week seems to have ruffled some disapproving feathers. "Why do you expect me to stay home and sulk," the actress asked in a statement released today. Ms Dutta, who lit the #MeToo fuse some weeks ago, recently filed official complaints with the police and the women's commission about actor Nana Patekar who allegedly harassed her on a film set 10 years ago. This apparently disqualifies Ms Dutta from going out and having a life, a sentiment expressed many times over in several vile comments on an Instagram post uploaded by the actress of herself, dressed in festive blue and white for the Navratri event which she attended with her sister Ishita Dutta and brother-in-law Vatsal Sheth. Tanushree with her sister Ishita and brother-in-law Vatsal Sheth

Tanushree Dutta isn't having any of this judgement. In a statement, she said: "For all those people offended with and questioning my recent outing for Navratri event I have some words of common sense to share. Why do you expect me or anyone who has spoken out about injustice to just stay at home and sulk? I've never done that and never will. I have been attending events for the last 10 years regularly and looking great and happy is my birthright as a human being. I'm a 21st century girl and I don't conform to how your primitive mindset would expect me to behave."

Tanushree Dutta also questioned why women who complain of abuse are held to an expected code of behaviour but not the men who allegedly abused them. "This raises an important topic of why girls and women, when they have the courage to speak out about harassment, abuse or assault, are then further stigmatized by society by imposing on them rules and codes of conduct post-complaint. For the last 10 years I have seen the four harassers of Horn OK Pleassss incident go out and about their life, do movies, attend events, win awards and laugh and smile and get accolades etc. Why not raise a question then? Now is my time."

"I will continue to raise awareness with my activism, I will continue to work, I will go out and have a great time with friends and family, I will get retribution, I will bring hope to many that have lost hope in this darkness, I will show a way to healing and wholeness to those that are broken. I will shine my light bright for all to see as I was not created to lurk in the shadows. And all this I will do while looking stunning, fantabulous and awesome."

The 'four harassers' Ms Dutta refers to are Nana Patekar, choreographer Ganesh Acharya, director Rakesh Sarang and producer Samee Siddiqui - the four men she has named as harassing or abetting in harassing her while filming a song for 2008 film Horn 'OK' Pleassss, a project she eventually exited.

A post shared by Tanushree Dutta (@iamtanushreeduttaofficial) on Oct 15, 2018 at 8:28pm PDT

10 years ago, Tanushree Dutta was summarily dismissed when she complained about the alleged harassment to the Cine And TV Artistes Association or CINTAA, which recently apologised to her for not taking action and said it was prepared to reinvestigate her allegations.

Nana Patekar has denied he harassed Ms Dutta and has sent her a legal notice demanding an apology. Mr Patekar has also exited the work-in-progress film Housefull 4, as has its former director Sajid Khan who is also accused of sexually harassing multiple women. Housefull 4 star Akshay Kumar announced last week that production had been suspended and that he would not work with 'proven offenders.'

Tanushree Dutta's renewed allegations against Nana Patekar triggered an avalanche of other #MeToo stories in which prominent industry figures such as Subhash Ghai, Alok Nath, Kailash Kher and others as alleged predators.