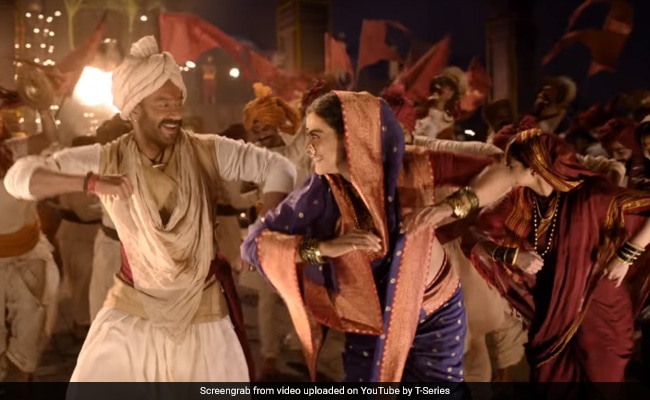 Remember that photo that Kajol posted on Instagram asking us to guess whether she's "In character or not"? Now, we know that the photo with Ajay Devgn is from the sets of Tanhaji: The Unsung Warrior song Maay Bhavani. Tanhaji co-stars Kajol and Ajay Devgn released the song Maay Bhavani on Thursday, making the film trend on Twitter. Ajay Devgn plays the titular "unsung warrior" Tanaji Malusare - Maratha ruler Chhatrapati Shivaji's general - and Kajol has been cast as his feisty wife Savitribai Malusare. The song Maay Bhavani is such a refreshing change from the battle scenes and war strategies seen in the film's trailer and other promotional videos released before.

In character or not?? Guess #TanhajiMarathiTrailer on 10th December. #tanhajitheunsungwarrior

Maay Bhavani is set against a festive background with Savitribai Malusare presiding over a puja. While we have been introduced to Tanaji as a warrior, the song Maay Bhavani portrays him as a family man with glimpses of the endearing bond he shared with his wife. The song begins with Tanaji surprising Savitri Malusare by attending the puja in disguise and then later revealing his identity. Both Ajay Devgn and Kajol, in celebratory mood, dance together in coordinated moves.

Watch the song Maay Bhavani from Tanhaji: The Unsung Warrior here. Composed by Ajay-Atul, Maay Bhavani has been sung by Sukhwinder Singh and Shreya Ghosal.

Saif Ali Khan features as Tanaji's nemesis Uday Bhan in the movie. Directed by Om Raut, Tanhaji: The Unsung Warrior releases on January 10, 2020, when it will clash with Deepika Padukone's Chhapaak.