Taimur Cares For Inaaya, They Learn From each Other, Says Soha Ali Khan

Soha Ali Khan said: "He tolerates her and they are learning from each other" 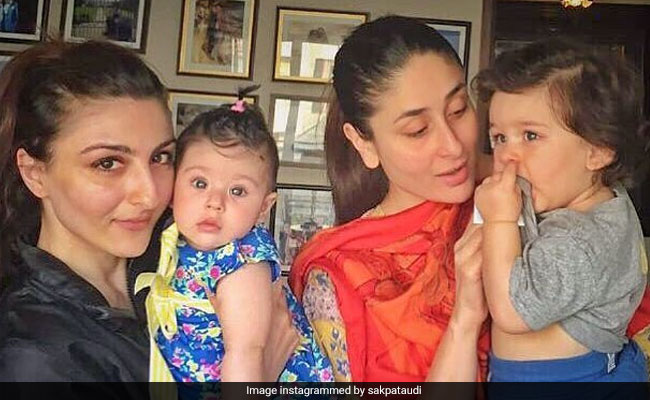 Actress Soha Ali Khan, who is the paternal aunt of Taimur Ali Khan, says the son of Saif Ali Khan and Kareena Kapoor is very caring towards her daughter Inaaya Naumi Kemmu. When asked about Inaaya's bond with her cousin brother Taimur, Soha said: "Now, both are too small and innocent kids. Sometimes they play with each other and sometimes they don't give attention to each other, but I have seen that Taimur is very caring."

"Once Inaaya pulled Taimur's hair thrice, but he didn't say anything to her. I think somewhere he knows that this is family, so he tolerates her and they are learning from each other," she added.

Soha was interacting with the media at the launch of Crompton's anti-bacteria LED bulb here on Thursday.

Inaaya already has a fan following who cannot get enough of her adorable pictures. From her outings with Taimur to her pictures from play sessions, Inaaya is a favourite of the paparazzi too.

In her latest picture posted by her father Kunal Kemmu on Instagram, it looked like the little one was set to follow in her father's footsteps and hit the roads as a biker. People have often seen Kunal posting pictures and videos from his riding sessions.

Soon we shall ride together and soon you shall have your own. Let no one tell you what you can or can't do. Make your own road and make your own journey. #bikerbaby

Talking about her husband and Inaaya's photograph together, Soha said: "Kunal is an avid biker. He is into biking. He has always said that when Inaaya will grow up and will be eligible to ride a bike then he would like to go on a bike ride with her."

(Except for the headline, this story has not been edited by NDTV staff and is published from a syndicated feed.)
Comments
taimurinaaya