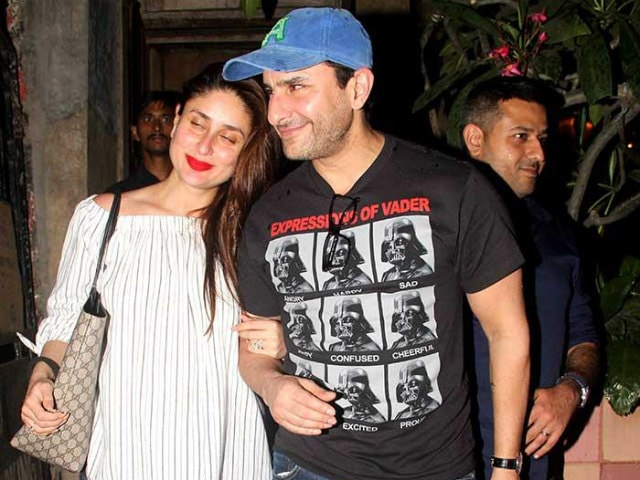 New Delhi: Celeb couple Kareena Kapoor and Saif Ali Khan's first baby, a son they've named Taimur Ali Khan Pataudi, arrived on Tuesday and fans cannot wait to get their hands on every update from the Pataudi residence. While new mom Kareena and baby is still at the hospital, interior designer Ritakshi Arora shared pictures of the 'Mini Nawab's' baby nursery on social media. Taimur, who is already somewhat of an internet sensation, will be welcomed into a room nicely done in shades of grey and white. The 'Pataudi Crest', as named by the designer, is simple and white with the royal Pataudi emblem engraved on the headboard. Royal huh?

"As promised, here's our exclusive sneak peek into Mini Nawab's baby nursery! Absolutely love the idea of the Pataudi Crest," Ritakshi wrote when she Instagrammed a collage.

Saif was at work during the last trimester of Kareena's pregnancy. Here's proof:

Kareena's baby arrived in Mumbai's Breach Candy Hospital on Tuesday morning. New parents - Kareena and Saif - announced the baby news with this statement: "We are very pleased to share with you all the wonderful news about the birth of our son: Taimur Ali Khan Pataudi, on the 20th of December 2016. We would like to thank the media for the understanding and support they have given us over the last 9 months, and of course especially our fans and well-wishers for their continued affection. Merry Christmas and a happy new year to you all." However, Twitter is bewildered by the new parents' choice of name and has likened the new Khan member's name to Timur or Tamarlane, the Central Asian invader who sacked Delhi in 1398.

Kareena was welcomed into the 'mommy club' by best friend Amrita Arora and her sister, actress Karisma with the most adorable of posts.

Karisma and Saif celebrated the arrival with the littlest Khan this way:

Promoted
Listen to the latest songs, only on JioSaavn.com
Kareena Kapoor, 36, and Saif Ali Khan, 46, fell in love on the sets of 2008 film Tashan. They dated for four years before getting married in 2012. Kareena and Saif are also co-stars of films like Omkara, Kurbaan and Agent Vinod.

Last seen in a small role in Udta Punjab, Kareena Kapoor's next project is wedding drama Veere Di Wedding, co-starring Sonam Kapoor and Swara Bhaskar. Kareena made headlines when she was cast in the film - actresses have earlier been dropped from movies after announcing their pregnancies, notably Aishwarya Rai Bachchan who was replaced by Kareena in Madhur Bhandarkar's Heroine. Saif Ali Khan has director Vishal Bhardwaj's Rangoon releasing next year.