Sye Raa Narasimha Reddy Movie Review: Chiranjeevi is the centre of the universe in a film that seems to be trying too hard to impress. 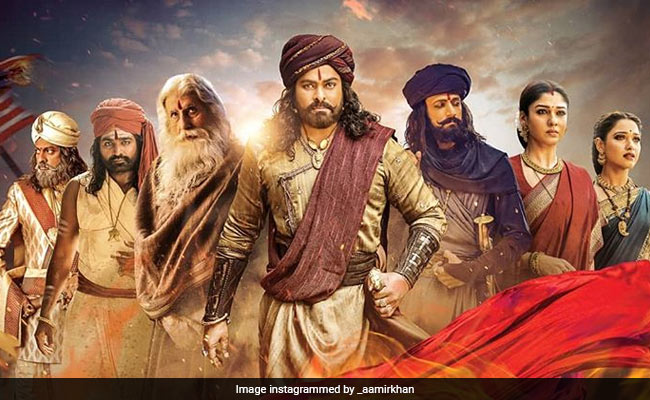 History as hysteria, India's freedom struggle as mythology and a megastar as a giant, spotless cutout in live-action overdrive: that, in a nutshell, is Sye Raa Narasimha Reddy, a film that is out to sweep the audience off their feet with sheer scale and spectacle. It succeeds only sporadically. Chiranjeevi's charisma hasn't waned one bit. He holds parts of the film together but an uneven screenplay prevents Sye Raa Narasimha Reddy from serving up anything more than a showy basket of tricks that are superficial at best.

The film, directed by Surender Reddy, starts unconvincingly somewhat like the tacky humps on the backs of a herd of inebriated CGI bulls that run amok early on and have to be tamed by the fearless protagonist before they can do any bodily harm to bystanders at a religious congregation. As the action unfolds, it keeps getting bigger and bigger until it seems in danger of exploding. Along the way, Sye Raa Narasimha Reddy suffers many an implosion, but invariably picks itself up when it is time to deliver its major action high points. 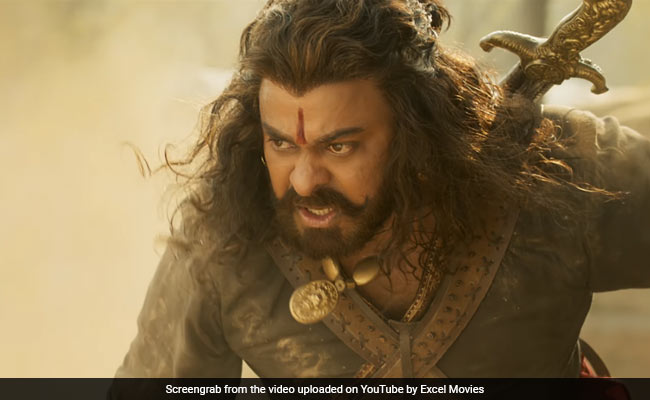 The biggest draw is undoubtedly the lead performance that breathes life into a sweeping saga of a righteous 19th century warrior of the Rayalaseema region, a forgotten freedom fighter who took on the might of the British empire with the help of his people and tens of other polygars of the Datta Mandalalu. Chiranjeevi is the centre of the film's universe - Sye Raa Narasimha Reddy is produced by his actor-son Ram Charan - and it is none the worse for it.

Throughout the film praise is showered on the hero's valour, leadership qualities and innate ability to inspire and mobilize his people to fight for justice, but when the big confrontations do take place, Narasimha Reddy turns into a lone ranger who can singlehandedly make the British pay for their sins. In an underwater duel, decapitates a particularly vicious English officer named Jackson with one sharp stroke of his sword. The head, which shoots out of the water like an unguided projectile, is then presented to Jackson's superior, a man with a black panther for a pet, on a platter. That is the extent to which Sye Raa Narasimha Reddy goes to amp up the drama of the freedom fighter's life. The film offers a long upfront disclaimer pertaining to the liberties that it has taken with fact. It is therefore easy to presume that this three-hour-long period epic is more apocryphal than historical. Not that it matters. Sye Raa Narasimha Reddy is not in the game of striving for historical accuracy. It thrives on the power of exaggeration. The film lays stress on patriotism, religiosity and India's ancient, pre-Mughal sabhyata, going to the extent of endorsing obscurantist rituals and beliefs. The Hindi voiceover asserts that the Mughals may have looted our khazana (wealth) but they could not rob our tehzeeb. It is important to note the use of sabhyata and tehzeeb (both meaning culture but etymologically only tenuously related) almost in the same breath. It points to the film's desire to emphasize the virtues of unity and religious harmony. 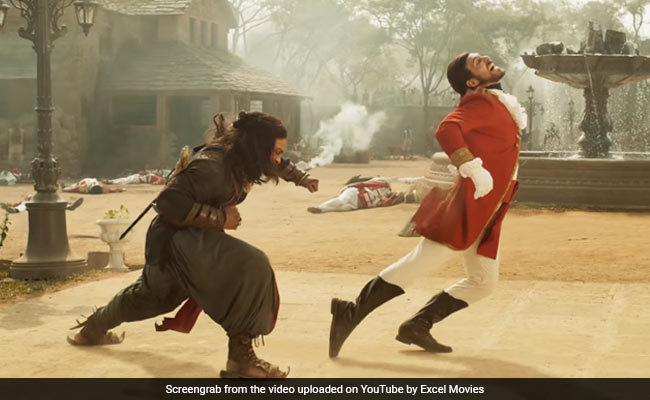 The tribute to a Telugu feudal lord whose revolt against the British East India Company over the latter's atrocities on farmers predated the 1857 Sepoy Mutiny by a decade is meant for mass consumption. It employs every mean possible to squeeze high drama out of the most innocuous of scenes. If everything in the film seems a touch overstated, it is clearly not unintentional. But some more restraint may not have undermined the impact that the director is seeking to make.

Rani of Jhansi (Anushka Shetty) is the narrator. Her army is down from 20000 men to only 100. The survivors are in no state to continue the battle. The indomitable queen steps up and invokes the never-say-die spirit of Narasimha Reddy. She tells her men about Narasimha's legendary courage. Almost the entire film is a flashback and therein lies a major scripting flaw. How on earth would Rani Laxmibai have known the minutiae of Narasimha Reddy's life all the way from his difficult birth - he was all but given up for dead at birth - to his series of heroic exploits as a rebel? Like the rest of the film, you have to take Rani of Jhansi's adulation with a generous pinch of salt. 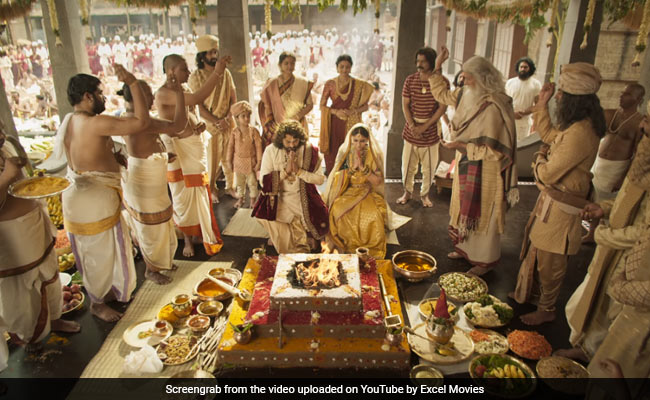 Even in its quieter moments - for instance, the scene in which Gosayi Venkanna (Amitabh Bachchan in a guest appearance) shares his wisdom with a young Narasimha Reddy (living or dying isn't important, winning is, the venerable guru intones) or the adult Narasimha's amorous exchanges with the temple dancer Lakshmi (Tamannaah), who warns the great man that she only brings bad luck to the people she loves - one can see that the ground is being paved for the grander, flashier sequences. 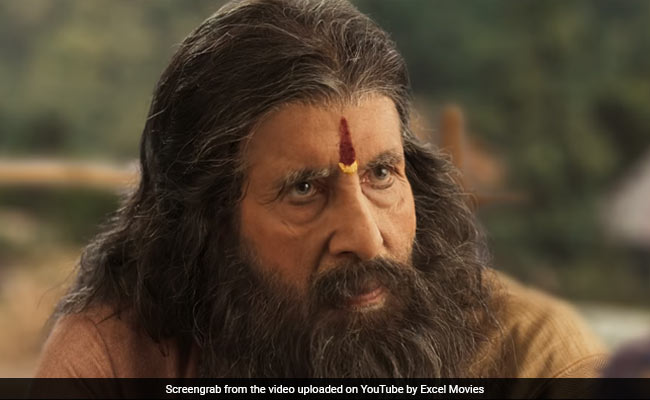 The film presents the righteous crusader as an invincible superhero. Chiranjeevi, returning to action after a long hiatus, plays the role with aplomb. In the scenes that matter, his presence is electrifying. He pulls off the action sequences with the sort of enthusiasm that actors half his age would be proud of.

The cast of hundreds is peppered with several other quality actors who serve to prop up the film without getting in the way of its principal purpose. Sudeep, Jagapathi Babu, Vijay Sethupathi, Nayanthara, Ravi Kishan and Mukesh Rishi - they all contribute their mite to the extent that the script allows them to. 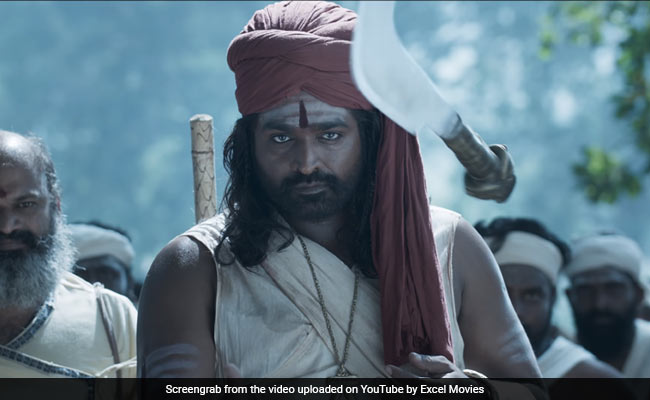 By the way, it is rather odd to see an actress who probably still is in her 40s (Lakshmi Gopalaswamy) play the role of a sexagenarian superstar's onscreen mother. But this isn't the first time that this has happened nor will it be the last.

On the technical front, the mega-budget Sye Raa Narasimha Reddy has the best deal that a film can hope for. Rathnavelu is the director of photography, A. Sreekar Prasad the editor, and Tapas Nayak the sound designer. Julius Packiam's background score is from the top drawer as are the songs composed by Amit Trivedi. However, in the ultimate analysis, given the wealth of topnotch technical talent the film has its disposal, Sye Raa Narasimha Reddy soar to the heights that were within its grasp.

It is a film that seems to be trying too hard to impress. It doesn't hit the high notes often enough to be regarded as an unqualified success.

(This is a review of the Hindi version of the film)