"It just feels like a really fun night to celebrate and cheer each other on and keep working," said Jennifer Aniston 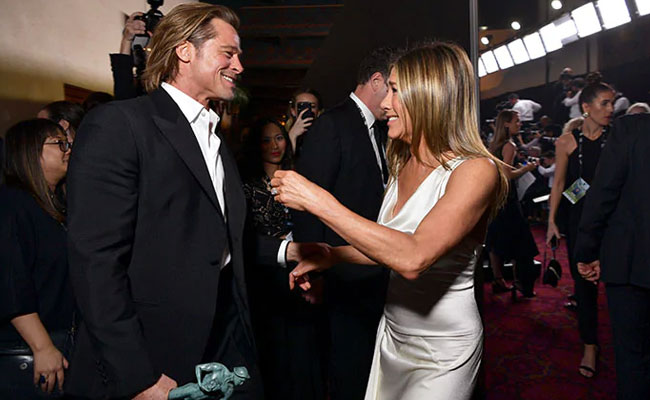 Jennifer Aniston and Brad Pitt feature on the trends list every now and then. Remember how Brad Pitt stopped everything and waited up backstage to catch watch Jennifer's acceptance speech at the recently-held SAG awards? Well, the F.R.I.E.N.D.S actress recently reacted to that. In an interview with ExtraTV, Jennifer was asked "Sharing the night with so many other actors, Brad included, he was back here watching you, what do you think?" Jennifer said, "Sweet." She added, "We've all grown up together, we really have. It just feels like a really fun night to celebrate and cheer each other on and keep working."

Brad Pitt won the SAG award for Outstanding Performance by a Male Actor in a Supporting Role for Quentin Tarantino's Once Upon A Time In Hollywood while Jennifer Aniston's won the Outstanding Performance by a Female Actor in a Drama Series category for The Morning Show. The Internet went in a sent of frenzy after the video surfaced on social media.

During the Golden Globes this year, Brad and Jennifer trended big time for the actress' reaction to Brad Pitt's acceptance speech after he won the Best Supporting actor award. During his speech, Brad said that he wanted to get his mother with him during the awards but he decided not to and said, "I wanted to bring my mom, but everyone I sit next to they say I'm dating." Jennifer Aniston chuckled at his statement.

#BradPitt: I was gonna bring my mom but I couldn't cause any woman I stand next too they say I'm dating them ...
*Zooms in on #JenniferAniston's face* #GoldenGlobespic.twitter.com/YsgWPffuQB