Sushmita Sen shared a photo of herself gazing at the waters 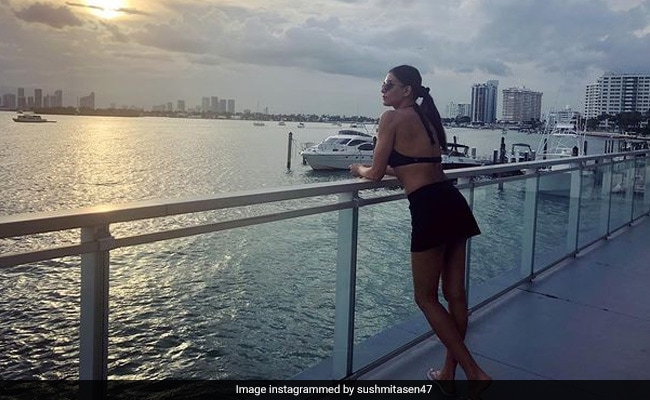 Sushmita Sen is one of the most popular Bollywood stars and for good reason. The actress is known for her charisma and chutzpah both, on-screen and off-screen. On social media too, the actress offers her fans a glimpse of her personal life and thoughts on various subjects. Now, Sushmita Sen has made our Wednesday a lot brighter by sharing a stunning image of herself gazing at the waters. Looking lovely as always, the former Miss Universe shared a caption about loving and accepting oneself. She wrote, “I live by the water, I dance by the sea, of all the things I could be. I choose to be me.” She also added the hashtags “work in progress”, “imagine” and “power of self” in the caption.

Addressing her fans, she further added, “I love you guys!”

A few days ago, Sushmita Sen had the Internet smiling as she shared a video of herself dancing with her two daughters at home. In the clip, Sushmita Sen and her daughters, Renee and Alisah are seen dancing with abandon alongside a lot of laughing and singing. In the caption, the actress said that since they were not in the mood to work out they chose to dance instead.

Sharing the clip, Sushmita Sen said, “Don't feel like working out? No problem, let's dance! Listen to your heart… Follow the beat and move to your own rhythm. (Cardio done).” Tagging Renee and Alisah, the actress added, “Mama's pride. Thank you for always keeping me on my toes! I love you guys." She also shared that the song used in the video is Copines by Aya Nakamura.

Sushmita Sen's Instagram posts are always brimming with positivity. A few days ago, she shared a black-and-white portrait of herself. In the caption, the star said, “Life may not be all black and white…but hey, you can always capture a moment in it!

On the work front, Sushmita Sen was last seen in the second season of the web series Aarya. The web series marked the star's comeback to acting after a hiatus.