Sharing a throwback of Sushant, Swastika wrote: "I'll remember this happy you." 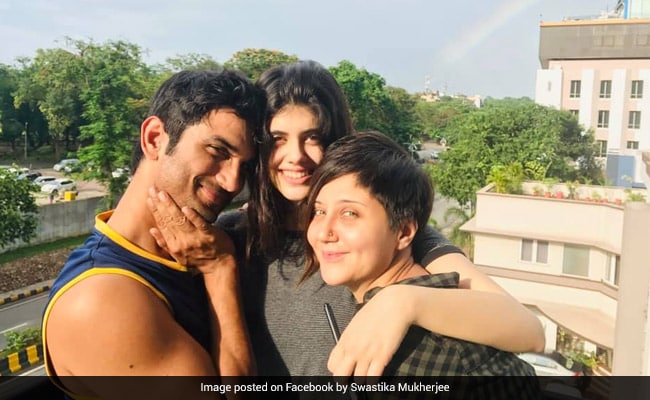 Actress Swastika Mukherjee, who stars in Sushant Singh Rajput's yet-to-be-released film Dil Bechara, wrote a powerful post after the actor's death last Sunday. "Why write fake RIPs?" asked Swastika, joining the social media outrage over condolence messages from several celebrities, accused of alleged double standards. Ms Mukherjee also condemned the often-distasteful media coverage around Sushant's death and wrote: "I am never going to recover from this disgust. Never. Ever. Ever. The disgust that the media, social media and agenda peddlers collectively have thrown at us. Why write fake RIPs? We didn't even allow the man to do that." Swastika Mukherjee, star of many Bengali films, also worked with Sushant Singh Rajput in Detective Byomkesh Bakshy!, one of Mr Rajput's best known films.

After Sushant Singh Rajput's death, a handful of celebs such as Ranvir Shorey, Nikhil Dwivedi, Anubhav Sinha, Shekhar Kapur and Raveena Tandon, wrote about "mean girls" and "the Bollywood Privilege Club" in their posts but omitted names while Karan Johar and Alia Bhatt, both of who mourned Mr Rajput in social media posts, have been censured for having spoken disparingly about the actor on an episode of Koffee With Karan.

"He was fighting till he was alive, he is fighting even from his grave," Swastika Mukherjee added in her post. Sushant Singh Rajput, last seen in Netflix film Drive, was found dead at his Mumbai residence on Sunday. He died by suicide, say the police, who are carrying out an investigation. The police will also probe allegations that Mr Rajput was depressed because of professional rivalry. Sharing a photo with Sushant Singh Rajput and actress Sanjana Sanghi, who also stars in Dil Bechara, Ms Mukherjee wrapped her post with these words: "Sorry Sushant, we are sorry. I'll remember this happy you. Today and always."

Earlier, Kriti Sanon, Sushant Singh Rajput's co-star of Raabta, lashed out at the media for being too intrusive at the funeral and at trolls who sent her hate messages for not immediately posting a tribute to the actor. "Banging the car window and saying madam sheesha neeche karo na to get a clearer picture of someone going for a funeral. Funeral is a very private and personal affair. Let's put humanity before our profession," Kriti Sanon wrote in a post.

There are a lot of thoughts crossing my mind.. A LOT! But for now this is all i wanna say

On the day of Sushant Singh Rajput's death, Sanjana Sanghi shared an emotional tribute for the actor, remembering some of the most cherished moments from Dil Bechara sets. "I refreshed my web pages 100 times hoping I'm reading some sort of horrible joke. I'm not equipped to process any of this. I don't think I ever will be. I'm definitely not equipped to articulate my feelings, this is me failing but trying," said her post. Dil Bechara was scheduled to release in May but was postponed indefinitely because of the coronavirus outbreak.

. . You gave me a forever, within a limited number of days, and for that. I'm forever grateful. - our beloved novel, The Fault In Our Stars A forever of learnings, and of memories. I refreshed my web pages a 100 times hoping I'm reading some sort of horrible joke. I'm not equipped to process any of this. I don't think I ever will be. I'm definitely not equipped to articulate my feelings, this is me failing, but trying. We were to save all our anecdotes and stories from the time we spent shooting together up until the release of our film, so we kept them in our stomachs till now. After 2 years of seemingly all the possible difficulties one single film can face, with all sorts of crap constantly being written, and being relentlessly pursued - we were supposed to FINALLY see watch it together - my first, and what you told me you believed was your best film yet. Amidst your journey, and in the middle of 16 hour long shoot days, you somehow found a way and had a desire to yell out to me from the opposite side of set screaming "Rockstar, itni achi acting thodi na karte hain paagal!" ; To guide me over things big & small through our film's process, To tell me to conserve my energy on set; To discuss even the smallest nuance you thought could change the narrative of a scene and would whole heartedly accept my disagreement; To discuss ways in which we could together forge a brighter educational future for the children of India. You were a force Manny, and you always will be. We're going to spend an eternity to try and make sense of what you've left us behind with, and I personally never will be able to. I simply wish you never left us behind in the first place. Just know, you have a country full of millions, looking up at you, smiling at you, thankful for you. As you smile back at us, from up above. The fact that you get to spend the rest of your time by your mother's side, I know you gives the only happiness you wanted in the world. #RIPSushantSinghRajput

Dil Bechara is the Hindi adaptation of John Green's popular novel The Fault In Our Stars and is directed by Mukesh Chhabra, who was one of the few film fraternity members who attended Sushant Singh Rajput's funeral on June 15.