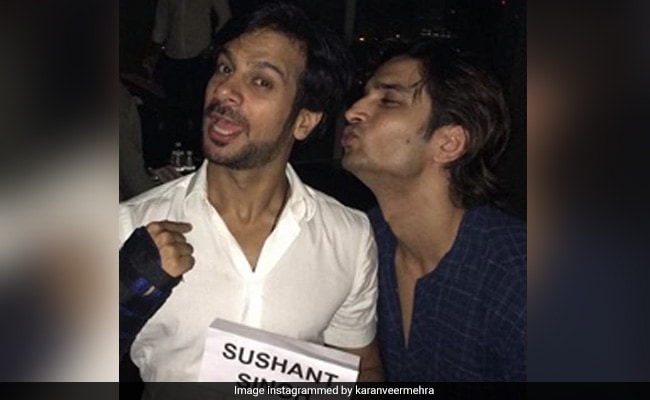 Sushant Singh Rajput's Pavitra Rishta co-star Karan Veer Mehra revealed in a memorial post that the actor helped pull him out of a low point, adding that he regretted not being able to do the same. Mr Rajput, 34, was found dead at home on Sunday; police say he died by suicide. Karan Veer Mehra described Sushant Singh Rajput as his best friend and, sharing a set of pictures of the two in happier times, wrote: He was much younger to me, but treated me like the younger one. Held my hand and pulled me right out of a s**t hole life. I was at my lowest (down and out personally and professionally); he would sit with me for hours and plan my next move."

"When he needed someone, I couldn't be there, for which I will never be able to forgive myself," Mr Mehra wrote, adding a reference to Mr Rajput's well-documented love for astrophysics - Priyanka Chopra will miss their "conversations about astrophysics at sunrise" and director Abhishek Kapoor ended his tribute to Sushant Singh Rajput with the words "stay interstellar." Karan Veer Mehra wrote: "Bhai somewhere in your stupid Quantum Physics, photons, cosmos, blackhole and the parallel world we shall meet soon. Till then with folded hands I look up in the sky and apologise for letting you down, for letting you go, for letting you do this." "Shirtless tight bear hug as always," Karan Veer Mehra signed off. Read his posts here:

.....> , next moment ,my entire life going forward, but what really really hurts the most is when he needed someone, i couldn't be there, for which i will never be able to forgive myself . I always Thot he is someone who takes life very seriously, & when the time came he took it so casually. Bhai somewhere in your stupid Quantum physics , photons, cosmos , blackhole & the parallel world we shall me soon. Till then with folded hands I look up in the sky and apologise for letting you down, for letting you go, for letting you do this. Shirtless tight bare hug as always Kamini Sorry @sushantsinghrajput #ripsushantsinghrajput

Kehtey hai dukh batney se kaam ho jaata hai , So giving it a try , they also say if you remember all the good and happy memories of the person who left , his journey becomes easier and simpler , and if I knew this person half as much as I did , I'd know he never liked it easier and simpler ,he never did something he didn't want to do & he never went to some place he didn't want to go to , so where ever he is right now , one thing is for sure he is stronger , happier and definitely "more" successful. "He was my best friend ", and like me there are hundreds who would say that , coz that's what he made people feel around him , all he expected , wanted and thrived to be was.. "the best"., believe you me when I say "he was the best" at whatever he did , even playing the fool, like you see in the pictures above , for the rest of us his talents , passion & success story is an inspiration.., "Kutti & Kamini" the names that we addressed each other with, from cars to bikes , films to actors , sports ,fitness , music , theater , dance , drinks the list is endless of the common interests and things between us .. from the word go we hit it like a house on fire , & true that whenever we met the house was on fire,(literally ,people who know , know this joke)Be it birthdays, New Years , Christmas , Diwali or Eid crashing at each other's pad after a hard party was a common thing .. , but what was astonishing about him was while the rest of the gang slept thru the day , he would wake up in a few hours and start work , prep for his next film or read a script or simply work on his craft, which is why most of us were awestruck, a bit of fans of his , & he always said "what I have achieved is nothing , if u put your mind , heart and soul it's really simple" he would down play his achievements and say anyone can do it. "Nahi bhai , tunney toh zindagi ki bhi nahi chalne di" We shared a funny rapport, he was much younger to me , but treated me like the younger one , held my hand and pulled me right out of a shit hole life , I was at my lowest, (down and out personally & professionally) he would sit with me for hours and plan my next move , next day , next moment ,.... >

Pavitra Rishta producer Ekta Kapoor, on Sunday, shared a tribute note for Sushant Singh Rajput on Instagram. She shared a screenshot of her Instagram exchange with the actor from a week back and wrote, "Not fair, Sushi."

Ankita Lokhande, who was unable to be present for Sushant Singh Rajput's funeral at Pawan Hans crematorium on Monday, visited Mr Rajput's family at his Mumbai home on Tuesday.