Sushant Singh Rajput wrote: "From a miniature Rocket to a life size one, this grown up kid will never cease to dream" 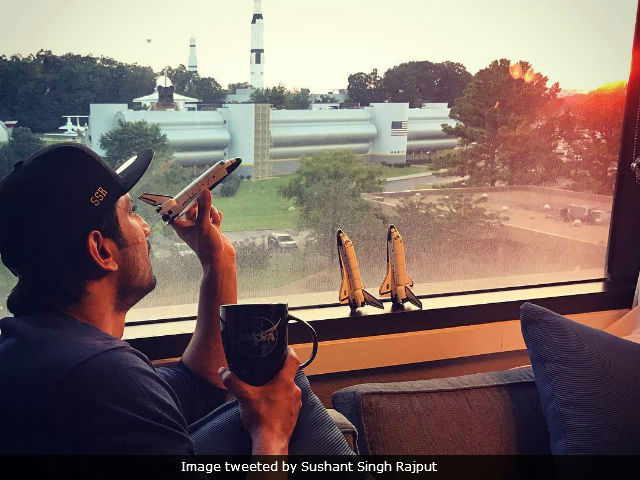 New Delhi: In case you are wondering why 'Sushant In Space' is trending on Twitter, you've reached the right place for information. Actor Sushant Singh Rajput has started prepping for his role in upcoming film Chanda Mama Door Ke, in which he plays the role of an astronaut. Sushant tweeted a picture of himself fiddling with miniature rockets while sitting inside a 'life size' rocket with a NASA embossed mug in his hand. Sushant captioned the picture: "From a miniature Rocket to a life size one, this grown up kid will never cease to Dream. My mother always wanted her 'Sushant in Space'. (sic)"

Take a look at 'Sushant In Space':

Sushant told Indian Express that when in NASA he will "Get an idea about the training that individuals undergo to become astronauts. I will be sitting in a comet and experience 1/6th of my weight on the moon. I am over the moon right now for an experience."

#Repost @sam.fitt with @repostapp .So we have started with the training for Sushant's next project ,#Chandamamadoorke in which @sushantsinghrajput plays an Astronaut. I will keep you updated about his workout and diet through this process of 2 months of his preparation for the film. Week 1 3 days Hypertrophy-Specific Training (HST) 3 days Calisthenics Training for Muscular Endurance all 6 days cardio Diet Week 1 we will keep the diet simple with carbs to protein ratio as 1:2 present stats height -183 cms weight - 194 pounds body fat - 12 % Target weight - 180 pounds body fat - 8% #Day1 vid :ab wheel rollout with resistance band Wherever there is #strength there is #resistance #fitnessaddict #musculation #hypertrophy #calesthenics #muscles #strength #resistance #fitceleb #fitnessmotivation #tattoo #mutation #bodyfitness #igfamous #videooftheday #fitnessaddicted #inspiration #fitlifestyle @sushantsinghrajput #doer

Promoted
Listen to the latest songs, only on JioSaavn.com
Chanda Mama Door Ke is directed by National Award-winning director Sanjay Puran Singh Chauhan (Lahore) and also stars Nawazuddin Siddiqui and R Madhavan. Nawazuddin, who also plays an astronaut, will join after completing Nandita Das' Manto while Madhavan will play the role of a test pilot.

Sushant Singh Rajput was last seen in Raabta and he also has Tarun Mansukhani's Drive, co-starring Jacqueline Fernandez in the pipeline. The film is produced by Karan Johar's Dharma Productions.