"This one's for you Anbana fans," wrote Suriya 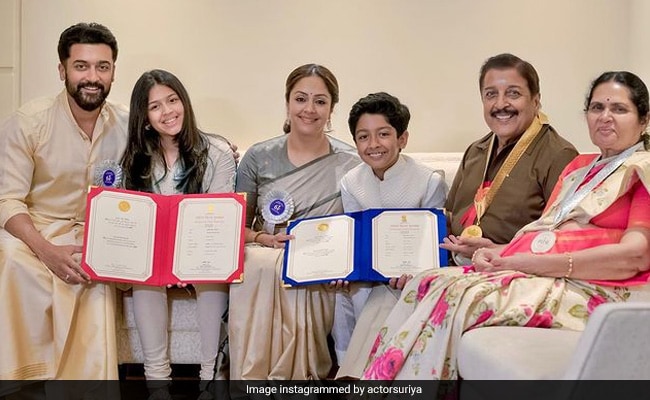 Suriya, on Friday, received the National Film Award for his stellar performance in Soorarai Pottru. The 68th National Film Awards ceremony was held at Vigyan Bhawan in  Delhi. Suriya was joined by his wife, actress Jyotika and children for the prestigious event. Soorarai Pottru was directed by Sudha Kongara Prasad. The film was jointly produced by Suriya and Jyotika. Now, the actor has shared a picture-perfect moment with this family to celebrate the award. In the caption, Suriya expressed his gratitude to  Sudha Kongara Prasad and wrote, “Ever grateful Sudha. Hearty congratulations to all the winners. This one's for you Anbana fans.” The hashtags read, “Soorarai Pottru”, and “National Film Awards”.

Suriya's fans, who are better known as Anbana fans, have flooded the comments section with red hearts and fire emojis.  Meanwhile, Aparna Balamurali received the Best Actress award for the film.

Soorarai Pottru also won the award in the Best Feature Film category. Sharing the happy moment with everyone on Instagram, Jyotika wrote, “Proud and blessed.” Don't miss the pic of the star couple with their children, daughter Diya and son Dev.

The film also received the Best Screenplay and Best Background Score awards, respectively. Suriya shared the Best Actor award with Ajay Devgn, who won it for his role in Tanhaji: The Unsung Warrior. Before this, Ajay Devgn received the Best Actor awards for  Zakhm (1998) and  The Legend Of Bhagat Singh (2002). The actor also shared a video and wrote, “Not counting the wins or the blessings, just feeling grateful for all of it. Most importantly, your love. I share this win with all of you. Honoured to receive my awards from the President of India, Smt. Droupadi Murmu.”

Watch: SS Rajamouli Gets A Standing Ovation For His Film RRR In The US