Sunny Deol And Son Karan Have A 'Great Bonding'. This Pic Is Proof, Courtesy Dharmendra 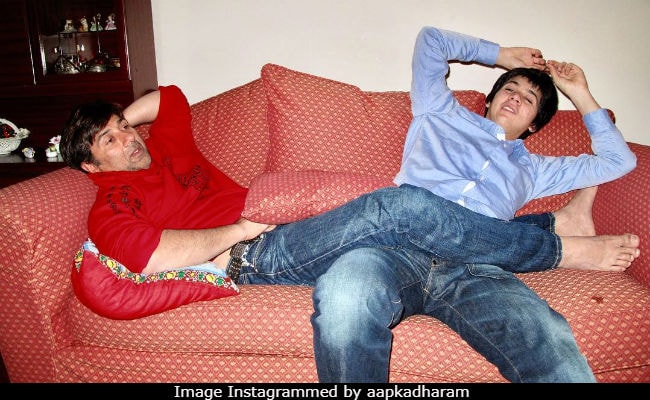 New Delhi: Veteran actor Dharmendra chanced upon a photo of son Sunny Deol and grandson Karan and he had to had to share it on Instagram. On his Instagram profile (which is unverified), Dharmendra shared a photograph of Sunny Deol and Karan catching up over a conversation in the most dad-son way possible. Dharmendra found out the sweetest caption for the photo and wrote: "Father and son. Great bonding! Love you Sunny and Karan." Aww, that's so sweet, Dharmendra. Netizens appear to think the same and reviewed the photo on Instagram with comments like "So sweet" and "nice one!" Karan is the elder son of Sunny Deol and Pooja and is all set for his acting debut.

Father and son. Great bonding !! Love you Sunny and Karan

Karan will be making his Bollywood debut with Pal Pal Dil Ke Paas, which will be directed by Sunny Deol and produced by Vijyeta films, which the Gadar actor co-owns. Last year, Sunny Deol had announced Karan's debut project with a tweet and soon enough, shout outs for Karan poured in from celebrities like Shah Rukh Khan, Rishi Kapoor and Salman Khan. Even Dharmendra had something to say to his grandson: "He has confidence and I want him to fly with his confidence. I wish he gets successful in his career and life," he told IANS.

Promoted
Listen to the latest songs, only on JioSaavn.com
Pal Pal Dil Ke Paas is a romantic drama in which Saher Bamba, a Shimla-based model, plays the female lead. About launching son Karan in Bollywood, this is what Sunny Deol had told PTI: "My father did not direct me. It is a 'huge task' since it is Karan's first film. I want to give my best to it. I am a bit conscious as I am launching him."

Meanwhile, Dharmendra is said to reunite with his sons - Sunny and Bobby Deol in the next film of the Yamla Pagla Deewana series.
Comments
sunny deolkaran deol