Student Of The Year 2 Poster: Tiger Shroff Gets Admission In 'Coolest School Ever' 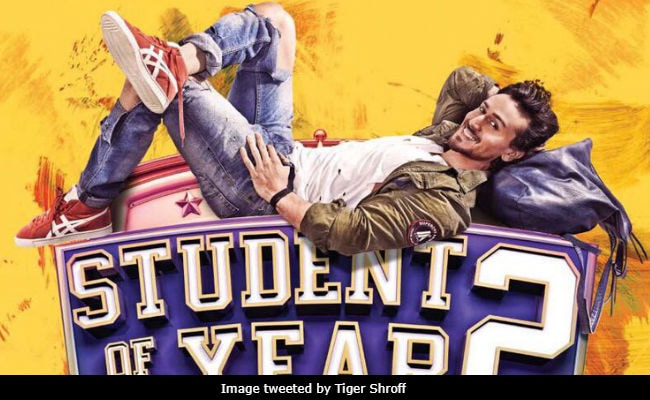 New Delhi: Tiger Shroff's got admission in the "coolest school ever" - the actor posted the first poster of his upcoming film Student Of The Year 2. The sequel to Karan Johar's 2012 film, which launched Alia Bhatt, Sidharth Malhotra and Varun Dhawan in Bollywood, will be directed by Punit Malhotra (I Hate Luv Storys and Gori Tere Pyaar Mein) and it will feature Tiger Shroff in lead role. The female lead opposite Tiger Shroff hasn't been announced yet but the names of Sara Ali Khan and Disha Patani were reportedly being considered for the part. Later, Sara's debut film Kedarnath was announced and Disha Patani's casting in Baaghi 2 (opposite Tiger) was confirmed.

Take a look at the poster of Student Of The Year 2:

Thank you @karanjohar sir and @punitdmalhotra sir for giving me admission into the coolest school ever! #StudentOfTheYear2#InItToWinIt#SOTY2@DharmaMoviespic.twitter.com/fbTB1aGlMG

Superb ! looking forward to the next batch ! #StudentOfTheYear2@iTIGERSHROFF@punitdmalhotra@karanjohar@apoorvamehta18 All the luck n love guys ! https://t.co/CgQW27Jnct

Tiger Shroff was confirmed for Student Of The Year 2 in August 2016. "There is pressure to take the franchise forward. I hope I am the right person and I don't let them down," Tiger Shroff told PTI at that time. He said that it will be a "youth-centric film" but didn't reveal other details.

Promoted
Listen to the latest songs, only on JioSaavn.com
Tiger Shroff has plenty of films in his kitty. He is starring in the aforementioned Baaghi 2, which is a sequel to his 2016 film, co-starring Shraddha Kapoor. Unlike Baaghi, the sequel will be directed by Sabbir Khan. Tiger Shroff also stars in the remake of Sylvester Stallone's Rambo series. Tiger Shroff was last seen in Munna Michael, co-starring Nawazuddin Siddiqui, which banked on his efficient Michael Jackson dance style.