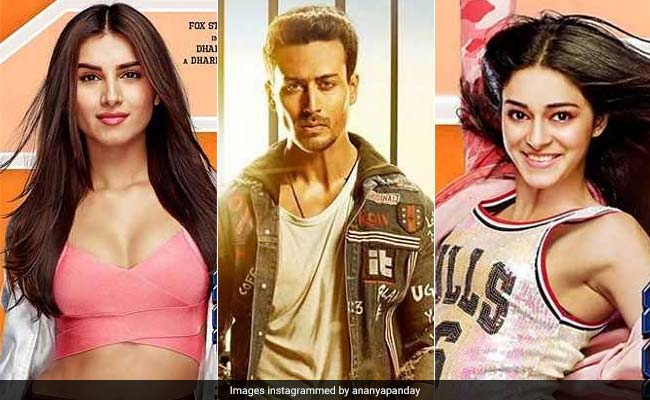 Tara, Tiger and Ananya in Student Of The Year 2. (Image courtesy: ananyapanday)

The makers ofStudent Of The Year 2shared new posters of Ananya Panday, Tara Sutaria and Tiger Shroff on Thursday on social media and fans can't keep calm. Ananya Panday, who will be seen playing the role of Shreya in the film, looks perky in a silver crop top, a pair of white shorts and a pink jacket in the poster. An excited Ananya captioned the poster: "All 'dem first day of college, nervous but excited feeIs. I'm coming for you, St Teresa." The film's other actress Tara Sutaria too looks pretty on the poster of Student Of The Year 2. Tara can be seen wearing a pair of silver shorts, topped with a pink bralet and a silver jacket. The film's lead actor Tiger Shroff, who will play the role of Rohan, looks intense on the poster of Student Of The Year 2.

The film's director Punit Malhotra introduced us to Ananya's character and wrote: "Look who we have jumping in mad excitement for her first day! Say hello to Ananya Panday aka Shreya!"

Tara Sutaria shared a poster from the film and captioned it: "Trust the magic of new beginnings." In the words of the film's director, Tara Sutaria is "ready to create a storm." He added, "Can you handle it? Presenting Tara Sutaria as Mia."

Punit Malhotra also gave us a glimpse of Tiger Shroff aka Rohan's poster from the film and wrote: "Our boy is all ready to take on the biggest competition of the year."

The posters of Student Of The Year 2 look so interesting that we can't wait to watch the trailer, which will release tomorrow.

Student Of The Year 2 has been produced by Karan Johar's Dharma Productions. The film is the second installment of the 2012 film Student Of The Year, with which Alia Bhatt, Varun Dhawan and Sidharth Malhotra stepped into Bollywood.

Here's What Kabir Singh Would Have Done During Lockdown, Per Shahid Kapoor