Ananya Panday Reminds Us Of A Student Of The Year 2 Anniversary With Pic Of Co-Stars Tara Sutaria, Tiger Shroff And Director Punit Malhotra 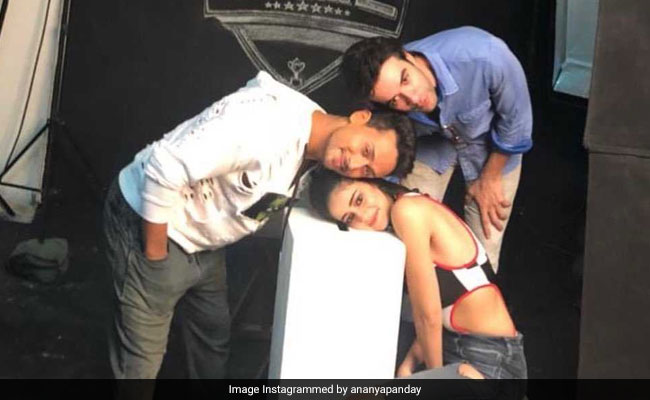 Its been a year since Student Of The Year 2 went on floors and on this special occasion, Ananya Panday shared pictures from the sets of the film, which marks her debut in Bollywood. On Tuesday afternoon, Ananya shared multiple pictures along with her film's director Punit Malhotra and her co-stars Tiger Shroff and Tara Sutaria. Ananya summed up the post in the best possible way and wrote: "Leaning on each other for a year now. April 9, 2018 - Our first day of shoot!" In her post, Ananya described the journey of shooting for the film as "magical" and added, "Every day since then has been nothing less than magical and now there's just one month to go for the film to release."

Ananya tagged her co-stars Tara Sutaria, Tiger Shroff, director Punit Malhotra and Karan Johar, who is producing the film under his banner Dharma Productions. She wrote: "Can never thank you enough." Bhavana Panday also left a comment on her daughter's post. She wrote: "Can't wait! Too excited."

Leaning on each other for a year now 9th April 2018 - our first day of shoot!!! Every day since then has been nothing less than magical and now there's just one month to go for the film to release!!!I can never thank you enough @punitdmalhotra @karanjohar @apoorva1972 @dharmamovies #SOTY2

Ananya frequently shares pictures with her Student Of The Year 2 co-stars. Ananya and Tara Sutaria even made their debut on Karan Johar's popular talk show Koffee With Karan last year. They were also accompanied by Tiger Shroff on the show.

Koffee has never tasted better A dream come true for me!!! Thank you so much @karanjohar for having us @tigerjackieshroff @tarasutaria__ #SOTY2 #TheStudents #KoffeeWithKaran

In a post shared by Ananya, the actress said that "filming Student Of The Year 2 made 2018 the best year" of her life.

Filming SOTY 2 made 2018 the best year of my life!! Thank you @karanjohar @punitdmalhotra @tigerjackieshroff @tarasutaria__ @dharmamovies @apoorva1972 @manishmalhotra05 @dop007 @adityaseal and the entire cast and crew I cannot wait for what 2019 has in store for us I LOVE YOU GUYS!!!!