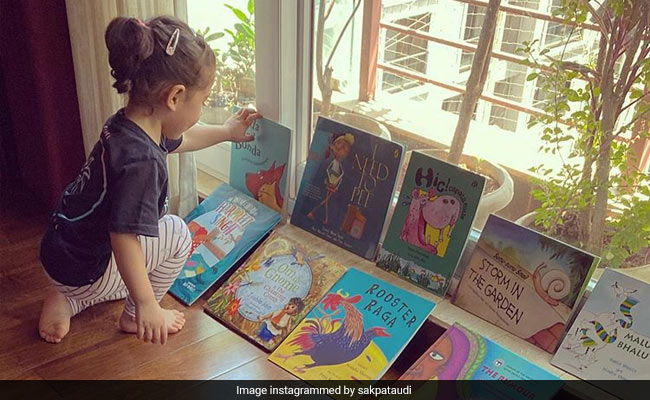 It's "story time" for Soha Ali Khan's daughter Inaaya. The actress, on Tuesday, shared an adorable photo of her little munchkin and revealed that she's "booked for the week." In the picture, little Inaaya can be seen arranging her story books such as I Need To Pee, Sunu-Sunu Snail: A Storm In The Garden, Rooster Raga, The Rumour and If I Could Teach My Teacher on the floor. She looks cute in a black t-shirt and trousers. Sharing the picture, Soha Ali Khan captioned her post like this: "Booked for the week!" She used the hashtags #lockdown #stoppedcountingthedays and #storytime in her post. Here's the picture we are talking about:

Inaaya is learning many things during the lockdown, including participating in some household chores. The reason we are saying this is because, in her previous posts, Soha gave us a glimpse of Inaaya shelling peas with father Kunal Kemmu. "It's just a 'matar' of time," Soha Ali Khan captioned the photo. In the hashtag, she added: "Two peas in a pod." Take a look:

Meanwhile, also check out some other pictures of Inaaya that Soha shared during the lockdown:

Soha Ali Khan and Kunal Kemmu got married in 2015 after dating for a few years and they welcomed Inaaya Naumi two years later in September 2017. Soha and Kunal have co-starred in films such as 99 and Dhoondte Reh Jaaoge. He also has a cameo in Soha Ali Khan's Mr Joe B. Carvalho, in which she starred opposite Arshad Warsi.