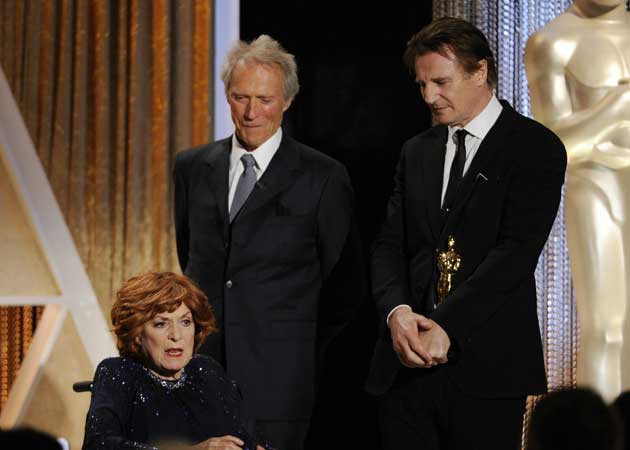 A constellation of stars gathered in Hollywood for an off-camera celebration of four stalwart film talents.

Pixar chief John Lasseter presented Miyazaki with an Oscar statuette, calling the Japanese animator "the most original filmmaker to ever work in our medium."

Accepting the trophy, Hayao said through a translator that he considered himself lucky, adding, "My greatest luck is that I got to meet Maureen O'Hara today."

The 94-year-old Ms O'Hara was introduced by Liam Neeson and Clint Eastwood, each of whom confessed to having a crush on the Irish-born beauty. Liam described her as "one of the true legends of cinema" and "one of the most adventurous women who ever lived," explaining the actress was a pioneer in doing her own stunts on screen.

Ms O'Hara came to the stage in a wheelchair and read a brief statement of thanks in which she acknowledged filmmakers Charles Laughton and John Ford, along with her co-star in several films, John Wayne.

When Liam handed her the Oscar, she asked in disbelief, "What's this?!"

"I only hope it's silver or gold and not like a spoon out of the kitchen," she said.

Jean-Claude Carriere accepted his Oscar from The Unbearable Lightness of Being director, Philip Kaufman. The French screenwriter lauded the many directors he's collaborated with over his five decades in film, saying, "They're always present, even today. When I'm working, I hear their voices."

Chris Rock and Susan Sarandon introduced Belafonte, who received the Jean Hersholt Humanitarian Award for his decades of activism for social justice.

Belafonte said he was moved by the recognition.

"To be rewarded by my peers for my work for human rights, civil rights and for peace. It powerfully mutes the enemy's thunder," he said.

He shared the honor with Poitier, whom he referred to as "my elderly friend."

"He redirected the ship of racial hatred in American culture," Belafonte said.

He spoke of Hollywood's progress toward telling stories that offer "deeper insights into human existence," such as "Schindler's List," ''Brokeback Mountain," and "12 Years a Slave," and film's far-reaching ability to influence popular opinion.

Promoted
Listen to the latest songs, only on JioSaavn.com
"Maybe, just maybe, it could be civilization's game-changer," he said.

The Academy of Motion Picture Arts and Sciences established the Governors Awards in 2009 to celebrate the annual winners of its honorary awards. Highlights from the ceremony will be included in the 2015 Oscar telecast.