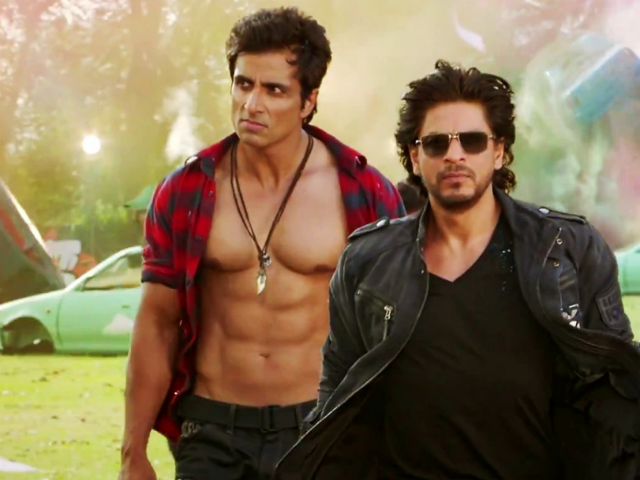 A still from Happy New Year

Mumbai: The makers of the upcoming Sonu Sood-starrer Tutak Tutak Tutiya have hinted that superstar Shah Rukh Khan can make a special appearance in the film.

The Dilwale star has given his voice-over to the trailer of the movie, which is the maiden production venture of Sonu's.

When asked if the 50-year-old actor will be seen in the film in a guest appearance, co-producer Deepshikha Deshmukh told PTI, "Well, never say never. Also, like we said at the trailer launch, this entire film has so many mysteries and layers, I will just let each layer unveil itself on its own in the due course of time."

Directed by AL Vijay, the film is a horror-comedy which also stars Prabhudeva and actress Tamannaah Bhatia.

Deepshikha said getting the Fan actor to give the voice-over was Sonu's idea and the superstar's voice suited the mood of the trailer perfectly.

"Actually it was all Sonu Sood. Shah Rukh did this voiceover for Sonu and they share a great rapport so when Sonu called and asked, Shah Rukh agreed to do so without any hesitation."

"He is the 'King Khan.' His voice suits the narrative of the trailer completely and adds that charm, so it was a complete cherry on the cake for us all," she added.

Promoted
Listen to the latest songs, only on JioSaavn.com
Tutak Tutak Tutiya will be released in three languages - Hindi, Tamil and Telugu on October 7.