Riva Arora is now all set to co-star with Janhvi Kapoor in a film, which appears to be the biopic on IAF pilot Gunjan Saxena 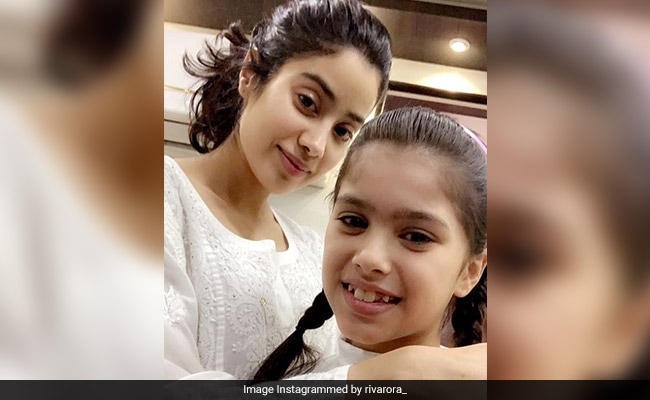 If you want to know why exactly the two names - Janhvi Kapoor and Riva Arora - are trending, read on. Remember the child actress who played the role of Sridevi's younger daughter Piyu in MOM? That's Riva Arora, who is now all set to co-star with Janhvi Kapoor in a film, which appears to be the biopic on IAF pilot Gunjan Saxena. On her unverified Instagram profile, Riva Arora shared a selfie with Janhvi and wrote in her cute little note that she had previously met Janhvi on the sets of 2017 film MOM. "With Janhvi Kapoor, lovely personality. Same love, same sweetness, full of life," wrote Riva. In her post, Riva added: "Proud working with amazing personalities, Dharma Productions."

Karan Johar's Dharma Productions is producing the biopic and fans are speculating that Riva has been cast to play the younger version of Gunjan Saxena while Janhvi plays the grown up version of the IAF pilot. Riva Arora was recently seen in Vicky Kaushal's Uri: The Surgical Strike and she will also be seen in Mard Ko Dard Nahi Hota.

One of my friend from facebook list went to watch my and sent this click seriously i feel proud to have friends like u all many friends sent clicks all praised my work, feeling proud keep blessing keep liking . #my #facebook #friends #thankyou #so #much #for #likesforlikes #likeforfollow #like4like #likeforlikeback #i #am #loving #mystyle #work #workhard #keep #blessed #feelings #are #so #excited #happy #to #get #lots #reviews #friday

Meanwhile, MOM is also releasing in China in March. Sridevi was posthumously honoured with the Best Actress National Award - her first ever - for MOM.

February 24 was Sridevi's death anniversary, ahead of which Janhvi, Khushi and Boney Kapoor flew to Chennai for a puja. On the work front, Janhvi Kapoor also has Karan Johar's Takht in her line-up, the ensemble cast of which includes names such as Ranveer Singh, Kareena Kapoor, Alia Bhatt, Vicky Kaushal, Bhumi Pednekar and Anil Kapoor.