"I think the first take is best as you are spontaneous," says Sridevi 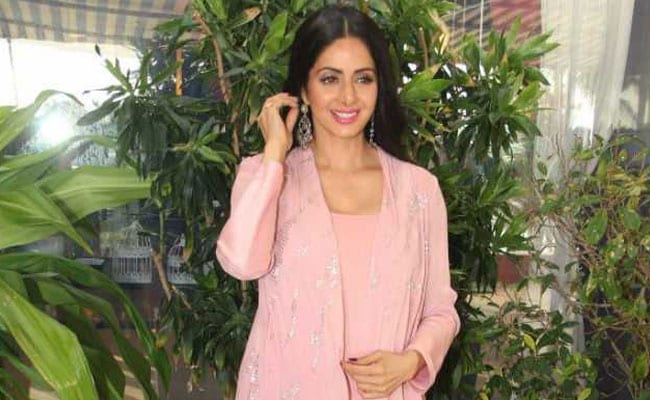 New Delhi: Actress Sridevi, who last featured in MOM which is her 300th film, says that she doesn't believe in retakes. "I don't remember doing more than one take for a film. I think the first take is best as you are spontaneous and after that it becomes a mechanical thing. I don't believe in second take at all," Sridevi said in an interview with news agency PTI. For the Chandni actress, it is the quality of a role that is of utmost importance. "I feel lucky and I have to thank my writers, directors and producers for giving me great part's to play on screen," PTI quoted Sridevi as saying.

Sridevi is married to producer Boney Kapoor. The couple are parents to teenaged daughters - Khushi and Jhanvi Kapoor. Sridevi also shared that she enjoys being at home. She said, "There is good quality of work around. I don't want to do films just because I have to do it. I am already busy at home, I enjoy being at home. I have two daughters. If there is something out of the box and good then only I do it."

Sridevi was last seen in MOM, a revenge thriller which narrates the story of Devki (played by Sridevi), who vows to seek revenge for injustice done to her step-daughter (played by Sajal Ali). Of the film, Sridevi told PTI: "The character hit me strongly. It is full of emotions, it is all about emotions and feeling them. I withdraw myself as an actor from everything on the sets. I did not plan to be aloof or not talk to anybody, it story did not allow me to do it."

Promoted
Listen to the latest songs, only on JioSaavn.com
MOM is Sridevi's first Bollywood venture after Gauri Shinde's English Vinglish (2012). In 2015, she featured in Tamil movie Puli.