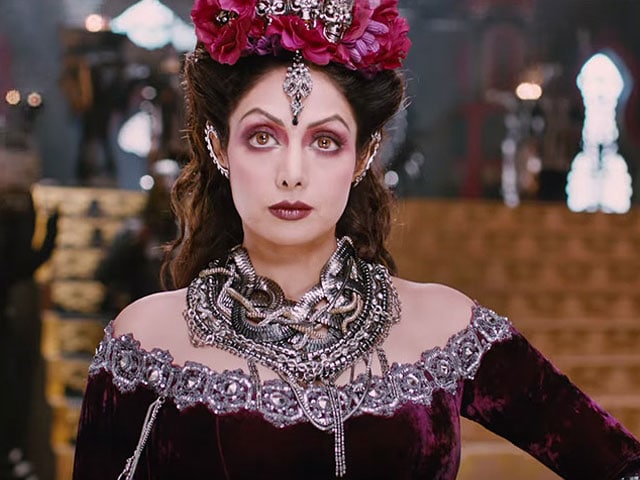 Sridevi in a still from Puli

Chennai: The makers of Tamil fantasy drama Puli on Monday claimed that actress Sridevi, who played an evil queen in the film, owed them Rs 20 lakhs and contrary to her claims, they 'didn't owe her a single penny.' (Also Read: Puli Actor Vijay Says He's Been Paying Tax 'Religiously')

Sridevi had reportedly filed a complaint at the Mumbai Producer's Council that the producers of Puli owe her Rs 50 lakhs.

In a four-page statement, producers Thameens and PT Selvakumar said they signed the actress for their film 'out of respect' and agreed to pay Rs 2.7 crores as her salary along with Rs 30 lakhs as service tax.

"We were paying her as per the agreement she had signed at the beginning of the film. However, in the final stages of production, Sridevi's husband Boney Kapoor asked us to pay her extra as we were planning to release the film in other languages too," read the statement.

The statement said Boney Kapoor told the filmmakers that Sridevi would come to the shoot 'only if she was paid extra.'

"After much deliberation, we decided to pay her 20 percent of the film's Hindi satellite rights, which was Rs 55 lakhs, and Rs 15 lakhs for the dubbed Telugu version," the producers claimed in the statement.

It was at the behest of Boney Kapoor, who convinced them that Sridevi has very good market in Hindi, that the makers decided to release the film in Hindi.

"We had hired three costume designers for Puli, but Sridevi insisted that we sign Manish Malhotra, and we paid him Rs 50 lakhs. She also convinced us to pay Rs 8 lakhs for the marketing designer for the film's Hindi version," read the statement.

The makers said they spent crores just for the sake of Sridevi. Despite doing so much, she didn't even come for the film's audio launch.

"She owes us money," the statement concluded.