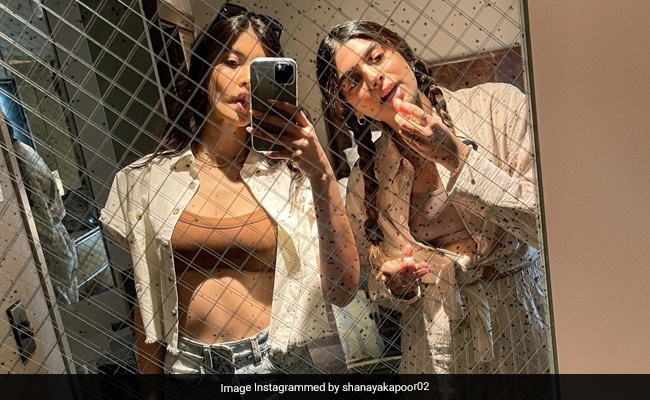 Shanaya and Khushi in a throwback (courtesy shanayakapoor02)

Shanaya Kapoor and her cousin Khushi Kapoor often make appearances together in Instagram posts and this story is about one such. On Friday, Shanaya remained busy on her phone and chanced upon a super cool photo of the Kapoor cousins. As is ritual, Shanaya had to share it on Instagram with the caption: "Get ready with us." In the photo, Shanaya and Khushi can be seen twinning in similar outfits - Shanaya in a brown crop top and distressed denims paired with a shirt. Khushi was spotted in an all-white look. Cute braids, Khushi. It appears, Shanaya captured the moment when Khushi was fixing her lip gloss. "Cuties," commented Shanaya's mom Maheep Kapoor.

Soon after Shanaya posted the photo, we spotted an interesting conversation in the comments section. Khushi reacted to the photo with the angel emojis while Shanaya described themselves as little "devils": "More like devils," she wrote with the help of emojis.

Khushi and Shanaya's photo appears to be from their New York diaries as we spotted them in similar outfits in a bunch of photos shared by Khushi in her New York special album. Swipe to see.

Shanaya Kapoor is yet to make her Bollywood debut but she's already a star on Instagram. Shanaya made her debut at the Le Bal in Paris in 2019. However, she has also already joined Bollywood but not as an actor but as an assistant director for Netflix release Gunjan Saxena: The Kargil Girl, which stars her cousin Janhvi Kapoor in the lead role. Shanaya also featured in bits and pieces on the Netflix show Fabulous Lives Of Bollywood Wives. Shanaya recently announced the big news about her Bollywood debut - she is all set to be launched by Karan Johar's Dharma Productions.

Meanwhile, Khushi aspires to be an actress and studies at the New York Film Academy.