"Who Looks Cute While Brushing?" The Internet Thinks "Only" Shanaya Kapoor Does 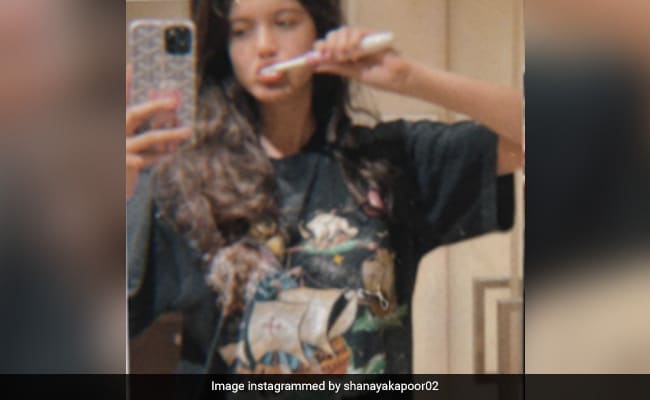 Shanaya Kapoor's OOTD choices can veer from stylish to comfy, depending on her mood. However, if her latest Instagram entry was to be described, cool and candid is what we would call it. She shared a few pictures of herself on her Instagram profile on Thursday. She can be seen dressed in a black top and can be seen brushing her teeth as she poses for the camera. "Good morning," she wrote, adding a couple of emojis. Her Instafam dropped comments like "cutie" and "adorable" on Shanaya's  post, who will soon step into Bollywood. "Who looks cute while brushing? Only Shanaya," read another comment.

Shanaya Kapoor trended big time for pictures from an old photoshoot that she posted on Instagram. See the post here:

Earlier this year, Shanaya Kapoor announced her Bollywood debut by sharing this post on Instagram and she wrote: "Woke up today with the most grateful heart! Here's to a great journey ahead with the DC talent family. Excited to kickstart my first film (Ahhh!) this July by Dharma Movies, can't wait for you all to see what we're up to! Stay tuned."

Shanaya, daughter of actor Sanjay Kapoor and jewelry designer Maheep Kapoor, began her career as an assistant director with the 2020 Netflix film Gunjan Saxena: The Kargil Girl, which featured her cousin Janhvi Kapoor in the lead role. Shanaya Kapoor also made cameo appearances in in Netflix's smash hit The Fabulous Lives Of Bollywood Wives. She came into the limelight when she made her debut at the Le Bal in Paris in the year 2019.