Inside Jahaan's Birthday, Courtesy Shanaya Kapoor: "No One Messes With My Little Brother Except..." 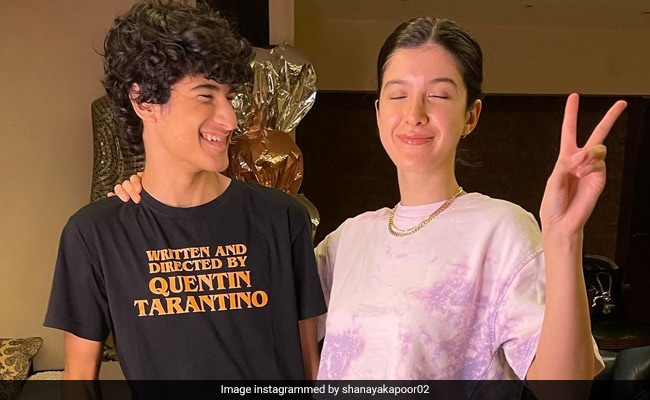 Shanaya and Jahaan Kapoor in a cute photo (courtesy shanayakapoor02)

Happy birthday, Jahaan Kapoor. Maheep and Sanjay Kapoor's son Jahaan celebrates his 16th birthday today. Birthday festivities of the 16-year-old Kapoor began early at midnight, glimpses of which have been shared on Instagram. While Maheep and Sanjay Kapoor shared heartwarming messages for Jahaan, his sister Shanaya Kapoor posted a cheeky birthday wish for her "little brother." Tough sister Shanaya wrote about her one rule when it comes to Jahaan: "No one messes with my little brother, except me!Happy birthday my fav. PS - Swipe to see Jahaan getting fed up with me," she wrote. Shanaya indeed packed a bunch of goofy photos of Jahaan from last night's birthday celebrations. While the birthday boy was busy face-palming, Shanaya looked adorable in tie and dye co-ords.

Twinning with Shanaya at Jahaan's birthday party of four was Maheep Kapoor. In her birthday wish for Jahaan, she wrote: "Happy 16th, the love of my life. Love you my Jahaan." In his birthday greeting for Jahaan, Sanjay Kapoor shared a cake-smeared photo of Jahaan and wrote: "Happy 16th JK , Love you." In the comments section, birthday wishes for Jahaan poured in from the likes of Chunky Panday, Farah Khan, Jackie Shroff, Seema Khan, Siddhanth Kapoor and others.

Shanaya and Jahaan Kapoor are cousins of Sonam, Rhea and Harshvardhan Kapoor. Arjun Kapoor and his sisters Anshula, Janhvi and Khushi are also Shanaya and Jahaan's cousins. Shanaya stepped into Bollywood working as an Assistant Director for Janhvi's movie Gunjan Saxena: The Kargil Girl. Shanaya is all set to make her Bollywood debut with a Dharma Production movie - she made the big announcement earlier this year.