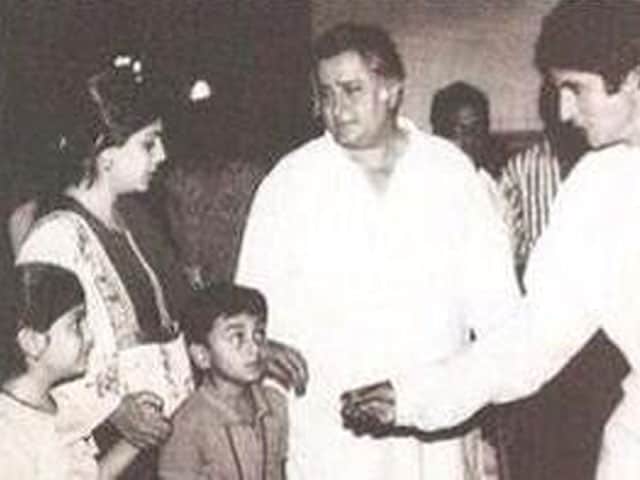 This image was tweeted by @MosesSapir

New Delhi: Two-and-a-half decades before Marvel blitzed cinemas with superhero after superhero, Ajooba roamed the land of 'Baharistan' ridding it off sinners. His trusted friend Hassan played Robin to his Batman. Tuesday marked their 25th year of operations - having been granted immortality by the silver screen - and actor Amitabh Bachchan, who played Ajooba, noted the milestone on social media. Among the several memories he shared was this photo of Ranbir Kapoor, then eight-year-old, and his sister Riddhima. Their father, Rishi Kapoor, played Hassan; their grand-uncle Shashi Kapoor directed the film. (Also Read: A Childhood Blockbuster Starring 4 Adorable Pint-Sized Kapoors)

Ajooba, which released on April 12, 1991, was made with Russian collaboration. On Twitter, fans posted images from the shoot in Ukraine, then a part of the USSR.

In 2013, Amitabh Bachchan revealed on Facebook that Shashi Kapoor was a strict taskmaster on set and wielded a stick which he used 'generously' on his troops whenever there was indiscipline in the ranks. "He lost the stick in Russia, Thank God," write Big B in a post on Facebook. Now's a good time to ask - lost or 'lost'?

Ajooba, which co-starred Dimple Kapadia, Sonam and Amrish Puri, lost money when it released but has acquired cult status over the years.

Big B, meanwhile, also wished his fans on the Punjabi festival of Baisakhi. His mother Teji Bachchan was a Punjabi.

The actor also shared an image of his maternal family:

Yes .. Gobind maasi ji 1st left then my Nana ji Daarji, then my Mother and her British Nanny .. https://t.co/dvMoStfDYd

Big B, 73, who was last seen on the silver screen in Wazir and Ki And Ka, has Pink and Te3n in the pipeline. Ranbir, 33, who last appeared in 2015's Tamasha, has Jagga Jasoos up for release.