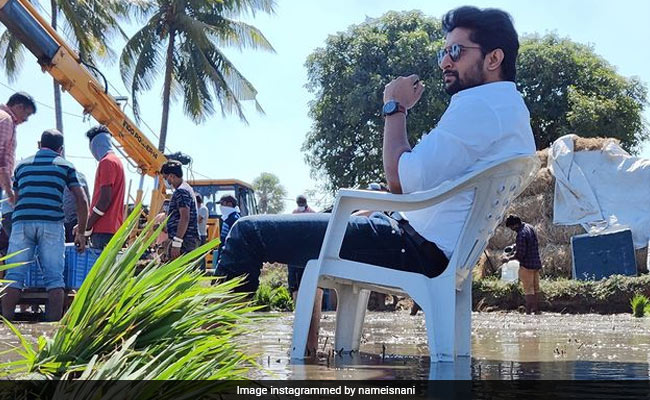 Nani on the sets of Truck Jagadish (Courtesy nameisnani)

South actor Nani's update from the sets of his upcoming film Tuck Jagadish came with a view. He is currently shooting in an undisclosed location. On a bright Tuesday morning, Nani is seen resting his legs on a palm tree across a lush green field. He didn't go for a lengthy note and simply captioned the picture "#TuckJagadishdiaries". The snap garnered over 1.5 lakh likes within a short span of time and also got Nani's fans super excited. Many of them even requested the actor to reveal the shooting location.

In another behind-the-scenes shot, Nani is sitting on a chair that is slightly submerged in marshy waters. While the actor waits for his next shot, we see crew members around him working on the setup.

Tuck Jagadish is scheduled for a theatrical release on April 23 after the date was pushed by a week. The film is being directed by Shiva Nirvana and produced by Sahu Garapati and Harish Peddi. Ritu Varma, who will return to Telugu cinema with this film, is the female lead. Tuck Jagadish also stars Aishwarya Rajesh, Nasser, Jagapathi Babu, Rao Ramesh, Naresh, Daniel Balaji, Tiruveer, Rohini, Devadarsini and Praveen.

Nani's 2019 film Jersey was recently honoured with two National Awards for Best Telugu Film and Best Editor. Shahid Kapoor, who will be seen in the Hindi adaptation of the Telugu hit, congratulated the team on its big win. Along with the customised poster of the film, Shahid wrote, "Huge congratulations to the entire team. Thanks for the extra pressure".