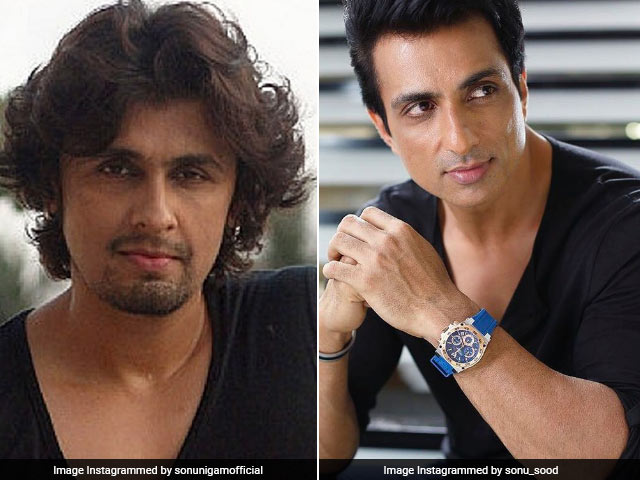 New Delhi: Actor Sonu Sood is having an identity crisis on Twitter after singer Sonu Nigam posted a series of grumpy tweets this morning about being woken by the morning azaan. The difference in last name has escaped some of those calling for a boycott of films - they've got the wrong Sonu and are trolling Mr Sood instead of Mr Nigam. Twitter has been galvanized into a frenzy of activity after reading posts from Sonu Nigam in which he complained that he was forced awake by the call to prayer despite not being Muslim, denounced the use of loudspeakers by mosques, temples and gurudwaras, and described having his sleep disturbed as 'gundagardi.' His tweets have divided social media opinion, with several taking his side and others criticizing his posts as hateful and intolerant. A #BoycottSonu hashtag is being floated - only, Twitter can't tell between the two Sonus and Mr Sood's image and handle have been used in some posts. Like here:

No one is allowed to disrespect my religion, not gonna watch his movies anymore. #boycottsonupic.twitter.com/pMib9SzMbc

Twitter reacted with hilarious incredulity, grabbing the chance to refer to misplaced outrage against e-commerce portal Snapdeal after the CEO of social networking app SnapChat said he wasn't interested in business from 'poor countries' like India.

People attacking Sonu Sood instead of Sonu Nigam r the same who attacked Snapdeal instead of Snapchat. These people deserve standing ovation

If the Snapchat/Snapdeal debacle has taught us anything, I'm totally expecting Sonu Sood to run out of movie contracts any minute now.

When people tag sonu sood instead of sonu nigam !! pic.twitter.com/HQKyZBcIhN

For anyone still confused, Sonu Sood is an actor who has starred in films like Salman Khan's Dabanggand Shah Rukh Khan's Happy New Year. Sonu Nigam is a singer of repute whose body of work includes playback for films such as Kal Ho Naa Ho, Saathiya, Dil Se, Border and Main Hoon Na.

Promoted
Listen to the latest songs, only on JioSaavn.com
Meantime, here are the tweets from Mr Nigam that set Twitter off:

Sonu Nigam has not acknowledged the mistaken trolling of Sonu Sood - yet.