Sonam Kapoor Was Missing Rhea Kapoor And Karan Boolani. So, She Did This 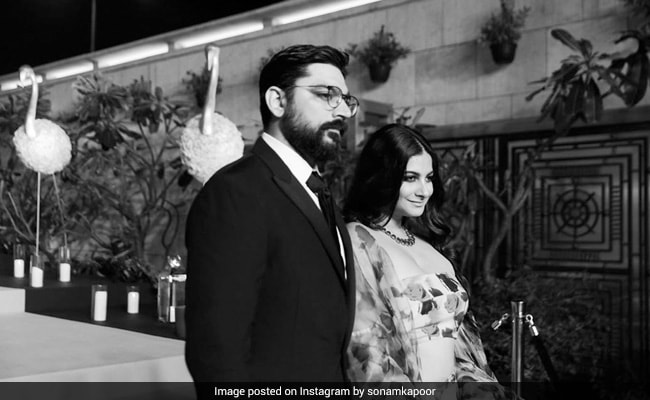 Sonam Kapoor seems to be really missing sister Rhea Kapoor and Rhea's boyfriend Karan Boolani, at least her latest Instagram entry says so. The 34-year-old actress treated her Instafam to a picture featuring Rhea and Karan. In the monochrome picture, Rhea and Karan can be seen standing beside each other while they look away from the camera. Sharing the picture, Sonam, who is currently in New Delhi, along with her husband Anand Ahuja, wrote, "Miss these two." She also tagged Rhea and Karan in her post. Karan Boolani reacted to Sonam's post and dropped heart emojis, to which Sonam replied, "Karan Boolani, how's it going?" Take a look at this adorable picture of Rhea and Karan together:

Earlier this year, in an interview with ZoomTV.com, Sonam spilled the beans on Rhea Kapoor's much talked about rapport with Karan Boolani. The Ek Ladki Ko Dekha Toh Aisa Laga actress told ZoomTV.com, "They've been dating for 10 years, they've not gotten married yet. When the happy news is there, it'll all be announced. But, no, they are not getting married this year."

Karan Boolani is frequently spotted hanging out with the Kapoors on lunch dates, dinner parties and almost always feature in Kapoor family portraits. His rapport with Rhea Kapoor's parents is evident from Anil Kapoor's caption for a Sunday brunch photo. "A happy Sunday with the only humans that make me feel all warm and fuzzy inside... Celebrating yet another beautiful love story," Anil Kapoor had written for this fam-jam photo, re-shared by Sunita Kapoor.

#Repost @anilskapoor with @get_repost ・・・ A happy Sunday with the only humans that make me feel all warm and fuzzy inside... Celebrating yet another beautiful love story! @kapoor.sunita @anandahuja @sonamkapoor @rheakapoor @karanboolani @harshvardhankapoor

Meanwhile, Rhea Kapoor, who is currently in home with family due to the nationwide lockdown, seems to be really missing Karan. A few days back, Rhea shared this adorable set of pictures featuring Karan Boolani and wrote, "I miss my person. I miss places. I miss pizza."

I miss my person. I miss places. I miss pizza.

Unlike Sonam Kapoor's husband Anand Ahuja, Karan Boolani is part of the film industry - he recently partnered with Anil Kapoor as an executive producer for Netflix series Selection Day.