"It takes all of us to break the clutter we have been stuck in for years," tweeted Taapsee Pannu 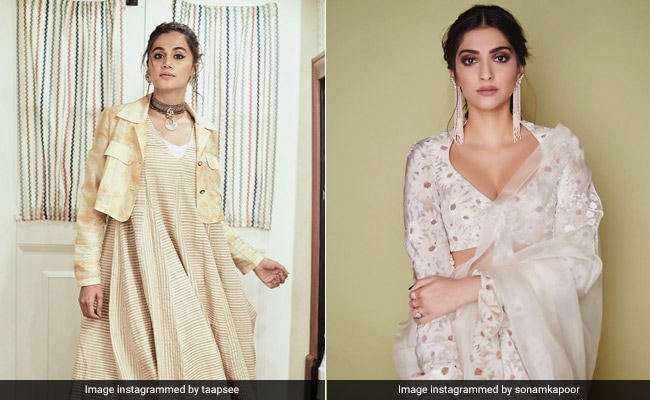 Taapsee Pannu found a new fan in the form of Sonam Kapoor, and the actress' latest tweet proves that. Sonam Kapoor, on Sunday, posted a status on her Twitter profile, acknowledging Taapsee Pannu for being a "clutter breaker" and her admiration for the Pink actress. She wrote on Twitter, "I really like Taapsee, she's quite a clutter breaker." Taapsee Pannu, who is currently busy with the promotions of her upcoming film Thappad, replied to the Raanjhanaa actress, thanking her for the sweet gesture. "Thank you so much Sonam. So sweet of you. Big hug. It takes all of us to break the clutter we have been stuck in for years," read her post.

Have a look at the aforementioned tweets here:

I really like @taapsee she's quite a clutter breaker.

Thank you so much Sonam ! So sweet of you. Big hug. It takes all of us to break the clutter we have been stuck in for years.

On the work front, Sonam Kapoor was last seen in the 2019 movie The Zoya Factor opposite actor Dulquer Salmaan. She is best-known for her performances in films such as Ek Ladki Ko Dekha Toh Aisa Laga, Neerja, Pad Man, Delhi-6, Bhaag Milkha Bhaag, Sanju, Raanjhanaa, Prem Ratan Dhan Payo, Veere Di Wedding and many more. The actress has not announced her upcoming projects yet.

On the other hand, Taapsee has worked in films such as Pink, Naam Shabana, Manmarziyaan, Mission Mangal, Judwaa 2, Saand Ki Aankh, Badla, Game Over and Baby among others. She will be next seen in Anubhav Sinha's film Thappad. Other than Taapsee, Thappad also stars Pavail Gulati, Ratna Pathak Shah, Dia Mirza and Kumud Mishra in pivotal roles. The film is slated to release on February 28.