Sonam Kapoor, as clicked by rumoured boyfriend Anand Ahuja. Anand accompanied Sonam and her parents for the National Awards ceremony in New Delhi 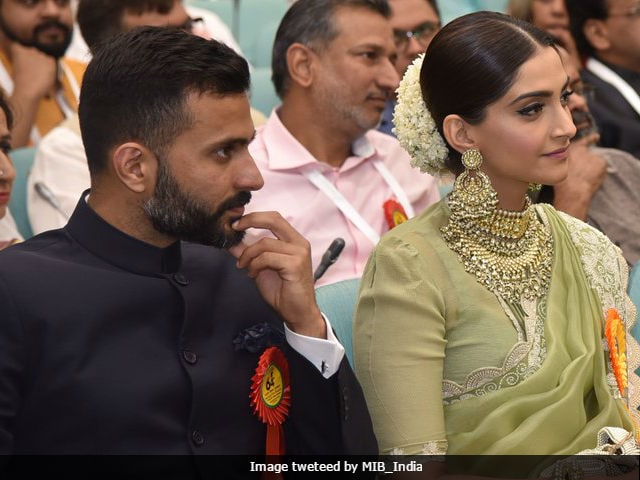 New Delhi: Have you seen the picture of Sonam Kapoor shared by her rumoured boyfriend Anand Ahuja yet? Well, it's totally adorable. Sonam Kapoor was in New Delhi to take home her first ever National Award (Special Mention), which she won for her role in Neerja, and Anand Ahuja was in her entourage. On Friday, Anand Ahuja shared a picture of Sonam (looking cute) and captioned it: "@sonamkapoor ... my fave! #everydayphenomenal (sic)." Sonam's parents, actor Anil Kapoor and Sunita also attended the ceremony. Anand Ahuja, like Sonam's proud dad Anil Kapoor, also clicked pictures of the actress at the event - who cares what the photographers clicked.

Take a look at Anand Ahuja's picture of Sonam Kapoor: Sonam Kapoor's expression proves she was totally thrilled to have received the National Award. The 31-year-old actress played the role of late Pan Am purser Neerja Bhanot, who was killed while she was trying to rescue passengers from a hijacked flight. The film, directed by Ram Madhvani, also won Best Film (Hindi) award.

Promoted
Listen to the latest songs, only on JioSaavn.com
The 64th national Awards were distributed by President Pranab Mukherjee in New Delhi on May 3. The same day, pictures of Anil Kapoor enthusiastically clicking Sonam (as she received the award) went viral. He wrote: "Clearly cannot contain my excitement. Surrounded by cameras but a father always turns photographer in these moments."

Clearly cannot contain my excitement! Surrounded by cameras but a father always turns photographer in these moments! Congratulations @sonamkapoor !! So proud!! #nationalfilmawards