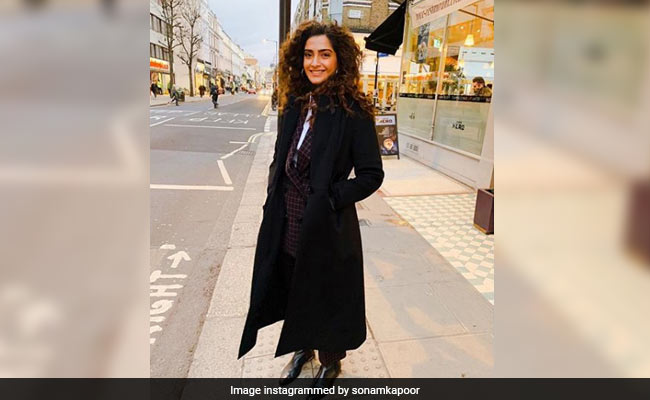 Actress Sonam Kapoor, who was shooting for her upcoming film The Zoya Factor in Mumbai, lit up Instagram with a million dollar photo of herself from London, where she checked in recently. In her latest post on Instagram, Sonam can be seen taking a stroll on the roads of Notting Hill (as suggested by her caption) dressed in warm cozy winter outfit. It appears that Anand Ahuja has not accompanied her on her recent trip to London and she is missing him very, very much. Sonam captioned the photo: "In Notting Hill and missing my beau." Sonam's post has close to five lakh views in less than six hours. Masaba Gipta, Shanaya Kapoor have commented on the post. "I'm enjoying this hair haan," Masaba Gupta wrote while Sonam's cousin Shanaya commented: "pretty, pretty."

Sonam Kapoor, who married her longtime boyfriend Anand Ahuja in a big fat wedding in May last year, often share loved-up photos of themselves from vacations and several events. Sonam Kapoor and Anand Ahuja were in Bali recently where they rang in the New Year. Lodged at the Como Shambhala Estate, the couple treated their fans to some priceless photos from the vacation. The duo were all smiles in one of the photos.

Happy happy new year guys. This year has been so beautiful. Have had three releases ( Padman, veere and sanju) got married to the most wonderful man in the world and moved into our first home together. I'm truly blessed with the best family and friends a girl can have. Ever grateful and ever thankful.. all my love... 2018 you were wonderful! And 2019 I'm looking forward to you!

Sonam Kapoor, who was last seen in an extended cameo in Sanju, is gearing up for the release of Ek Ladki Ko Dekha Toh Aisa Laga. The Shelly Chopra Dhar-directed film marks her first film with father Anil Kapoor. The film also stars Rajkummar Rao and Juhi Chawla.