Actress Sonam Kapoor is back to Mumbai after attending the 70th Cannes Film Festival. The 31-year-old actress said that Indian filmmakers fear that 'film festival' tag will hamper the commercial success of their films 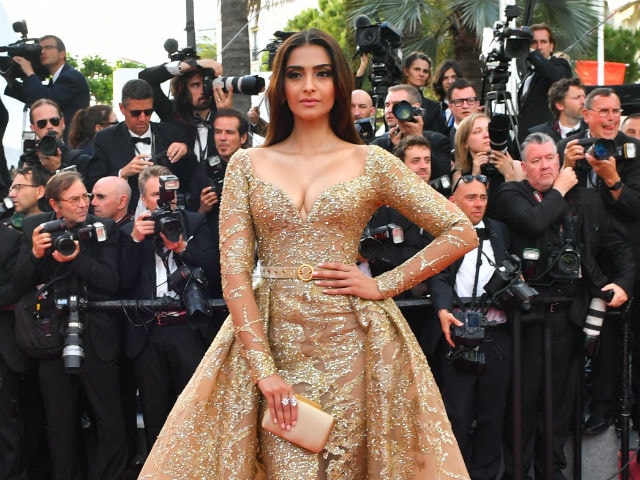 New Delhi: Actress Sonam Kapoor is back to Mumbai after attending the 70th Cannes Film Festival. The 31-year-old actress amazed her fans and followers as she made her Cannes red carpet finale appearance in a gorgeous golden gown, designed by Elie Saab. In a recent interview to news agency PTI, Sonam Kapoor said that Indian filmmakers keep away from fests as they fear that 'film festival' tag will hamper their commercial success. "I don't know why there are no Indians films coming here. I just know that Indian market is very different from the international market. As soon as you put a tag of festivals on it, producers are under the impression that the film isn't going to do well commercially," PTI quoted Sonam Kapoor as saying.

She added: "I think that's why many producers don't put our films in festivals, unless we need somebody to distribute them."

The Raanjhanaa actress told PTI that she experienced the same certain producers as they don't want their films to be perceived as 'serious'. "That is what has been my experience with certain films that I've been a part of where producers are like 'we don't want to put our films in festivals because we don't want that perception (of the film being serious),' PTI quoted Sonam Kapoor as saying.

"I don't agree with it at all. I feel a film like Slumdog Millionaire, The Lunchbox got a lot of attraction and became a worldwide success because of festivals," she added.

Last month, Shabana Azmi, who portrayed the role of Sonam Kapoor's mother in the National Award winning film Neerja, posted a picture of herself from the 1976 Cannes Film Festival on Twitter and wrote: "In Cannes1976 for Nishant in official section. The simplicity of it all. Film was important not the clothes!"

In Cannes1976 for Nishant in official section.The simplicity of it all. Film was important not the clothes! pic.twitter.com/hmHA2LHCN1

When questioned about the veteran actress' tweet, Sonam Kapoor told PTI: "It is a film festival and all (others) are walking for a film. I am here for a makeup brand. If I was here for my film, I would be dressing very differently. Since I am here for a makeup and glam brand, I think it makes sense to me to look a certain way."

The Thank You actress also spoke about being compared with Aishwarya Rai Bachchan and Deepika Padukone, the other L'Oreal Paris brand ambassadors at Cannes. "The comparisons are not in my hands, it's what the media is doing, so they have to decide whether it is fair or unfair. They are pitting one woman against the other. They should be celebrating all women. I consider all of this foolish, I don't even like to indulge in it," PTI quoted Sonam Kapoor as saying.