Sonam Kapoor Di Wedding: Everything You Wanted To Know But Were Afraid To Ask

Here's your official guide to the Sonam Kapoor-Anand Ahuja wedding 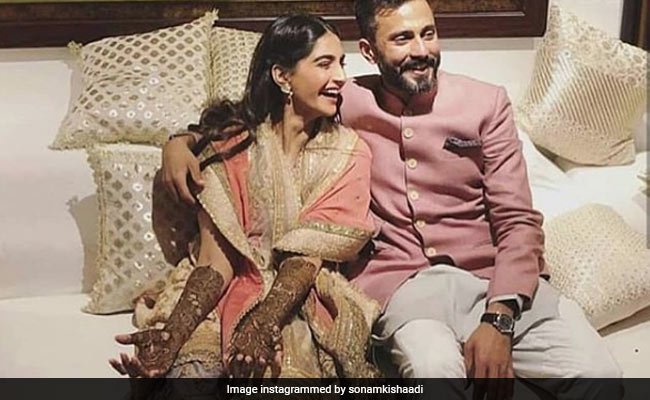 New Delhi: The sun shines brighter in Mumbai today for it's the wedding day of Sonam Kapoor and Anand Ahuja. The Sonam-Anand wedding (which was only confirmed earlier this month), kept the gossip mills occupied for weeks with all possible speculation doing the rounds on the Internet. And after the big announcement was made on May 1, the focus shifted to what may be the venue, how elaborate will the wedding be, Sonam's bridal outfit, their honeymoon and most importantly, the groom-to-be. You can thank us later because we have jotted down all that we know about the wedding in one place. Here's your official guide to the Sonam Kapoor-Anand Ahuja wedding.

Rockdale (which is reported to be the bungalow of Sona's aunt) in Bandstand Bandra, have been zeroed in for Sonam Kapoor's wedding venue. The wedding is scheduled between 11 am to 12: 30 pm and will be in accordance with Sikh rituals. The wedding was preceded by a mehendi on shaadi eve and a pre-mehendi party on the day before. The wedding festivities will be wrapped with a party in the evening at The Leela in Mumbai. If you are invited to the wedding, there's one thing you need to remember, Sonam and Anand have a request: "Your presence on our special day is the only gift we desire" (as was read on their wedding invitation).

Sonam and Anand reportedly opted for e-invites to skip what they considered wastage of paper and opted for an uber cool assortment of three invitation cards for three functions to be held over two days. The invites are clearly inspired by nature and have been designed with shades of green with three different designs of foliage printed on them. They also mention the dress codes for separate functions.

The dress code for Sonam Kapoor's wedding is Indian traditional with no colour preference mentioned. Sonam's celebrities may make a colourful entry at the wedding venue after sporting "shades of white" at Monday's mehendi ceremony. However, for the party in the evening, guests can sport Indian or Western Formal - take your pick, please.

Now, here's what we know about Sonam's husband-to-be. Anand Ahuja belongs to a Delhi-based entrepreneurial family - he is the grandson of Harish Ahuja, who is the owner of garment manufacturing company Shahi Exports. Anand has now taken over as the firm's managing director. He also owns wardrobe label Bhane, a brand which Sonam often sports, and he also owns sneaker brand VegNonVeg. Anand lives in Golf Links and not in the Rs 173 crore bungalow owned by his grandfather on Prithviraj Road.

Sonam Is A Busy Star, So, What About The Honeymoon?

Sonam and Anand are reportedly considering October or November for their honeymoon as the actress has a tightly packed roster for this month and ahead. Speaking to Mumbai Mirror, a source revealed: "Anand won't be at Cannes with her but the couple is planning an October-November honeymoon which will be delayed because of the bride-to-be's choc-o-block schedule." Soon after the wedding, Sonam will walk the red carpet at the Cannes Film Festival on May 14 and May 15 representing cosmetics giant L'Oreal. After her Cannes visit, Sonam will concentrate on her promotional duties for Veere Di Wedding.

After weeks of speculation about Sonam Kapoor di wedding, this is how the big news was dropped as a delightful surprise. Both the Ahuja and the Kapoor families released a joint statement, saying: "The Kapoor and Ahuja families, take great joy and pride, in announcing the marriage of Sonam and Anand. The wedding will take place on the 8th of May in Mumbai. Since it is an intimate affair, we request you to respect the family's need for privacy. Thank you for all your blessings and love, as we celebrate this special moment in our lives."

Promoted
Listen to the latest songs, only on JioSaavn.com
Here's a look at Kapoor family and celeb guests at the mehendi that was held last evening:

A post shared by Harshvardhan Kapoor (@harshvardhankapoor) on May 7, 2018 at 6:36am PDT

Can't wait to see Sonam Kapoor as a new bride. How excited are you? We are very.