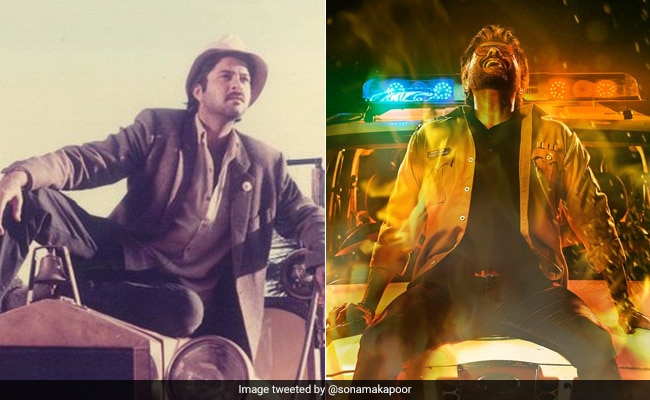 Sonam Kapoor says its "Flashback Friday." But no, you're guessing it wrong. She didn't share a throwback photo of herself. It's Anil Kapoor's pictures that she has shared on Twitter - one from now and one from 33 years ago. The 63-year-old actor's new film Malang released on Friday. Anil Kapoor, who has featured in iconic roles previously, will be now seen in a romantic-thriller. Sonam Kapoor took to social media and shared two pictures - one from father Anil Kapoor's blockbuster film of the 80s Mr India and another one from Malang. In her tweet, Sonam Kapoor wrote, "Mr India and Malang! 1987 and 2020!" The Khoobsurat actress further wrote about the inspiration she takes from her dad by adding, "Dad, your timeless appearance, hard work and talent inspires us all!" She also sent her best wishes to her father and the Malang crew.

Mr. India and Malang!
1987 and 2020!
Dad, your timeless appearance, hard work and talent inspires us all! Wishing you and the entire crew of Malang all the very best! @AnilKapoor#UnleashTheMadness#FlashbackFridaypic.twitter.com/ljDlr6pTlo

Noted how Sonam interestingly chose these two pictures? Anil Kapoor can be seen sitting on a car in both the stills from Mr. India and Malang. Anil Kapoor retweeted Sonam's post, acknowledging how he "loves sitting on cars."

I clearly love sitting on cars!! Thank you so much! @sonamakapoor!! Love You Beta!! https://t.co/N8Q34oDCup

The makers of Malang held a special screening a day ahead of the film's release in Mumbai. It was attended by many celebs including Katrina Kaif and Sonam Kapoor. Anil Kapoor posed for a picture with her daughter. Apart from Anil Kapoor, Malang also stars Aditya Roy Kapur and Disha Patani in lead roles. Meanwhile, Kunal Kemmu also has in a pivotal role in the film. Anil Kapoor will be seen playing the role of a cop in Malang.

The film is directed by Mohit Suri and co-produced by Luv Ranjan, Bhushan Kumar, Ankur Garg and Krishan Kumar.