Sonam Kapoor, 35 Today, Is The Only Person Dad Anil Is "S**t Scared Of"

"She's my confidant, my joy, my pride, the most generous-hearted soul I know," wrote Anil Kapoor 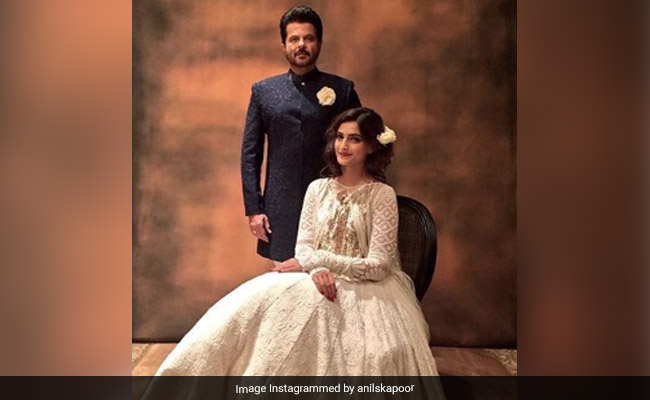 Happy birthday, Sonam Kapoor! The Delhi 6 actress turned 35 on Tuesday. Celebrating her birthday, Sonam Kapoor's dad Anil Kapoor wrote a super adorable wish on his Instagram profile. Anil Kapoor shared multiple pictures with daughter Sonam and revealed that "the only person" he is "sh*t scared of" is Sonam Kapoor. In a hilarious comment, Sonam Kapoor's husband Anand Ahuja said that he and Anil Kapoor are scared of Sonam. In one of the pictures posted by Anil Kapoor, he can be seen holding a pint-sized Sonam, while in another shot, Sonam and Anil Kapoor can be seen smiling with all their hearts. Sharing the pictures, Anil Kapoor wrote, "To a daughter like no other, the perfect partner to Anand Ahuja, a star on screen and an icon with an unimitable style. She's my confidant, my joy, my pride, the most generous-hearted soul I know, (the only person I am sh*t scared of) and now a bona fide master chef! Happy birthday, Sonam Kapoor! I'm so happy that you're here with all of us today. Love you, always!" Read his post here:

To a daughter like no other, the perfect partner to @anandahuja, a star on screen and an icon with an unimitable style. She's my confidant, my joy, my pride, the most generous hearted soul I know, (the only person I am shit scared of) & now a bona fide master chef! Happy Birthday, @sonamkapoor! I'm so happy that you're here with all of us todayLove You, Always!

Within minutes of posting, Anil Kapoor's pictures were flooded with comments. Reacting to the pictures, Sonam Kapoor wrote, "love you, daddy," while Sonam's husband Anand Ahuja commented, "Can't emphasise how scared you and I am of her. Hahaha... Lovely post"

Earlier, in a media interaction during the promotions of Ek Ladki Ko Dekha Toh Aisa Laga, Sonam Kapoor revealed that Anil Kapoor is scared of her. Speaking of her experience of working with dad Anil Kapoor in the film, Sonam said, "Apparently dad was skeptical on the sets, that's what he told my sister Rhea. Though he did not say anything to me, he went and told Rhea that he was constantly scared of me on the sets."

Sonam celebrated her birthday with her family in Mumbai. The Veere Di Wedding actress shared multiple glimpses of her birthday celebrations on her Instagram stories. Anand Ahuja, on the other hand, wished Sonam Kapoor in a hilarious way. He photoshopped pictures of all of Sonam Kapoor's friends and shared on his Instagram profile. The photoshopped picture features Kareena Kapoor, Karisma Kapoor, Malaika Arora, Arjun Kapoor and others. "We all came together for a quarantine photoshoot for the queen of photoshoots! Happy birthday from us all," wrote Anand. Take a look:

Sonam Kapoor is the eldest daughter of Anil Kapoor and Sunita Kapoor. The couple are also parents to Rhea Kapoor and Harshvardhan Kapoor.

Sonam was last seen in The Zoya Factor co-starring Dulquer Salmaan and Angad Bedi. The actress has not announced her upcoming projects yet.