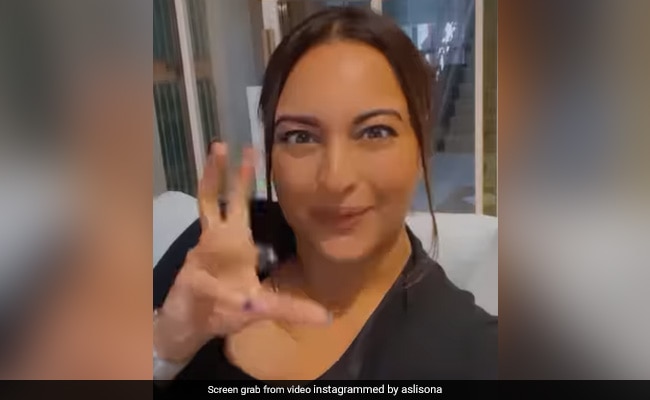 Sonakshi Sinha in a still from the video. (courtesy aslisona)

Sonakshi Sinha celebrated her 35th birthday on June 2 this year, a few days later, her rumoured boyfriend and actor Zaheer Iqbal shared a post for her on Instagram, in which he also wrote "I love you." Zaheer's post sparked wedding rumours and Sonakshi reacted to it in a super fun way. She posted a video, the caption on which read: "Me to the media: Kyu haath dho kar meri shaadi karwana chahte ho (Why are you adamant in getting me married)?" She also wrote, "Le media:" as Shah Rukh's dialogue "Accha lagta hai mujhe, bohut mazaa aata hai (I feel good. This is fun)" played in the backdrop. The caption on her post read: "Proposal, roka, mehendi, sangeet sab fix kar hi liya hai toh pls mujhe bata do."

This is what Zaheer Iqbal posted for Sonakshi Sinha and wrote: "Happy Birthday Sonzzz. Thank You for not killing me . I love you. Here's to a lot more food, flights, love and laughter. PS - This video sums up the entire time we've known each other."

Earlier this year, Notebook actor Zaheer Iqbal spoke about his dating rumours with the actress and told India Today: "Now it has been so long, I don't even care. I am like okay if you think, then you think. Keep thinking. It's good for you. If it makes you happy that I am with her, then it is good for you. Then if it makes you upset, I am sorry. Stop thinking about that."

Sonakshi Sinha made her big Bollywood debut with the 2010 film Dabangg, opposite Salman Khan. She also featured in the other two parts of the Dabangg series alongside Salman Khan.

Sonakshi Sinha has starred in films like Rowdy Rathore, Son Of Sardaar, Dabangg 2, Holiday: A Soldier Is Never Off Duty, Lootera, Once Upon A Time In Mumbai Dobaara, R... Rajkumar, Action Jackson, Kalank and Mission Mangal, among others. She was last seen in Bhuj: The Pride Of India, co-starring Ajay Devgn, Sanjay Dutt and Nora Fatehi. She will next be seen in the film Kakuda. She will also star in Double XL with Zaheer Iqbal and Huma Qureshi.