Sonakshi Sinha is 'Fearless.' John Abraham is 'Proud' of Her 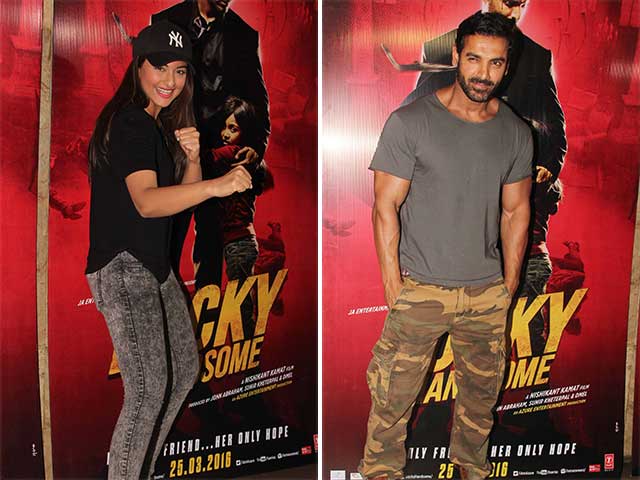 Mumbai: Actor John Abraham is all praises for his Force 2 co-star Sonakshi Sinha and is proud of her for performing challenging stunts fearlessly for the film.

"Sonakshi is very sweet. She is a fantastic co-star. One of my best co-stars, and the work that she has done in Force 2, I really like action and especially the action that she has done. This girl absolutely has got no fear," said John.

"We had to jump. I asked Sonakshi if she was sure, and she said, 'I am sure I will jump.' So from the second floor and third floor, she jumped. I am very proud of her. Watch Force 2. Our director is very special, Abhinay Deo, who made Delhi Belly," added John.

"It is a fantastic film. By July, we'll complete it. And we have still got about 50 percent of the shoot left," said John at the screening of his new film Rocky Handsome. Sonakshi was also present at the screening and said that she is excited about the film.(Also Read: Hola! Sonakshi, Anil, Hrithik's Matargashti in Spain for IIFA 2016)

"The biggest compliment that I have received is that it is your best film up till date. People have spoken about the action. They have liked the action and they said that on Indian screens, they have not seen this kind of action," added John.

"We have worked very hard on the action sequences and it's turned out to be superb," he added.