"If we are not satisfied with the action taken on our complaint, we will try other remedies too," Sona Mohapatra's lawyer said 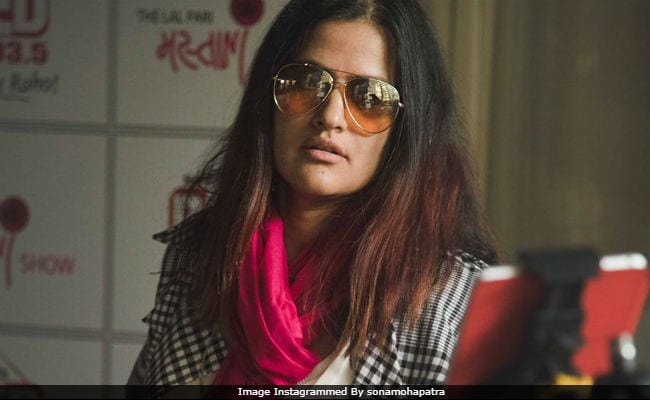 New Delhi: Sona Mohapatra's lawyer Henal Vakhari said that the objections raised against the singer's appearance in her new music video Tori Surat is unwarranted as the Censor Board of Film Certification (CBFC) had already passed it, reports news agency ANI. On Monday, in a series of tweets addressed to Mumbai Police, Sona Mohapatra had alleged that she had received threats from Madariya Sufi Foundation, who asked her to remove the 'vulgar' video from all platforms as it could 'flare communal tensions.' ANI reports that Henal Vakhari said that the verse written by Amir Khusrao (as used in Sona Mohapatra's song) is 'already in public domain' and the credit has been given to him for the lyrics.

"If we are not satisfied with the action taken on our complaint, we will try other remedies too. It's our constitutional right to ensure our safety and security," Henal Vakhari told ANI. According to the police complaint filed against the foundation, Om Grown (a music company) had received a mail from Sufi Sameer Madarvi in this regard alleging that the "after watching the music album Toori Surat and Lal Pari Mastani which are available on YouTube Channel, the sentiments of millions of Muslims are hurt as the singer Sona Mohapatra is alleged to have inappropriately dressed while singing Sufi songs written by Hazrat Amir Khusroo," ANI reports.

"Dear Mumbai Police. I have received a threatening notice from the Madariya Sufi Foundation to remove my music video Tori Surat from all communication mediums. They claim that the video is vulgar, will flare communal tensions. I need to know whom to write in my response to at your end," Sona Mohapatra had tweeted, adding that the foundation called her a 'regular offender' and that she 'insulted Islam during one of her performances on Coke Studio.

Dear @MumbaiPolice I have received a threatening notice from the Madariya Sufi Foundation to remove my music video Tori Surat from all communication mediums. They claim that the video is vulgar,will flare communal tensions.I need to know whom to write in my response to at ur end

The Madariya foundation along with the agreement of the Nizamuddin Dargah have an issue with the description of my Tori Surat music video, "earthy incarnations of the feminine Divine" & with "a sleeveless dress and body exposing dancers". Basically with everything woman & free.

Dear @MumbaiPolice the Madariya Sufi foundation claims to work for Sufism,peace & universal brotherhood in their threatening notice to me. I ask you & #India ,what about the 'sisterhood'?Why is it that in this day & age the women expected to cover up, not sing or dance in public

Respected @CPMumbaiPolice , I have been sent a threatening email notice from the Madariya Sufi Foundation demanding that I take down a music video that has been passed by the censor board of India & I would like to forward the same to your official email id along with my response

She also posted Tori Surat's music video with a message:

The earthy incarnations of the feminine divine https://t.co/CzhoCgVkZ6

Promoted
Listen to the latest songs, only on JioSaavn.com
)If this offends you, then please go live in your pre-historic cave. )— SONA (@sonamohapatra) May 1, 2018