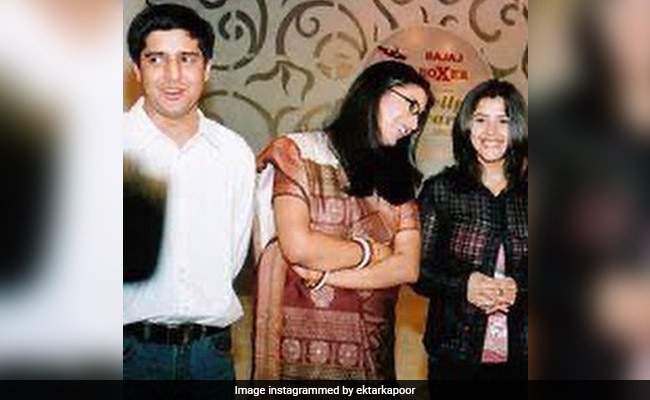 Just when we thought Smriti Irani couldn't get any funnier, she proved us wrong. The Union Minister once again occupied a spot on the list of trends, courtesy her ROFL comment on her producer friend Ekta Kapoor's post. On Monday, Ekta Kapoor made a trip down memory lane and shared a few throwback pictures featuring herself, Smriti Irani and ZEE5 CEO Tarun Katial. The "then and now" photos appear to be from an event held in the late Eighties or early Nineties. Sharing the photos, Ekta Kapoor wrote in the caption: "Three of us! What a throwback #tarunkatyal @smritiiraniofficial and me! #thenandnow."

And here's what Smriti Irani commented on her post:

Smriti Irani and Ekta Kapoor's friendship started when the former made her television debut with Ekta Kapoor's Kyunkii...Saas Bhi Kabhi Bahu Thi in 2001. Their friendship has evolved over the years. The duo also share adorable posts for each other on social media.

Your Mom and I sat in silence a year ago waiting for you to come home ( for a chatter box she was quiet & composed ) , your Masa freaks out that you are around 2 strong headed women & hopes we don't make a rabble rousing feminist out of you ; before anyone at @balajitelefilmslimited or @altbalaji could hand you a script or an edit tool I made sure you got a doctor's set to play with. Your Nana Nani Mama & brother adore you. I refuse to respond to the name Ravioli ( he is a dish for sure but no way will someone make Ravioli his call sign) you are loved Ravie Kapoor happy birthday god bless @ektaravikapoor

Happie bday maaasi no1! From giving u awards to@getting awards from u we have come a long way! To u blushing shyly in a white shirt n jeans when @monishasinghkatial n I told u we r throwing u out of ghar Ek mandir to ..cast u as a lead in our new show saas bhi kabhi bahu thi ..n then ordering a cake as it was ur bday that u dint even mention out of fear ..to seeing u command mtngs politely yet firmly n seeing powerful men listen intently..I think iv seen it all with u ! U become a wife n a mother ..I become a mother everything changed n nothing did! Rishton ka rang badla ...ainaaa ab bhi wahi! Happie bday super woman

Smriti Irani played Tulsi Virani in Kyunkii...Saas Bhi Kabhi Bahu Thi. She has also featured in shows such as Hum Hain Kal Aaj Aur Kal, Thodi Si Zameen Thoda Sa Aasmaan and Virrudh among others. She ventured into politics in the year 2003. Smriti Irani is currently serving in the cabinet of Prime Minister Narendra Modi as the Minister of Textiles and the Minister of Women and Child Development.