Smriti Irani Sat Through The Avengers: Infinity War End Credits Like The Rest Of Us 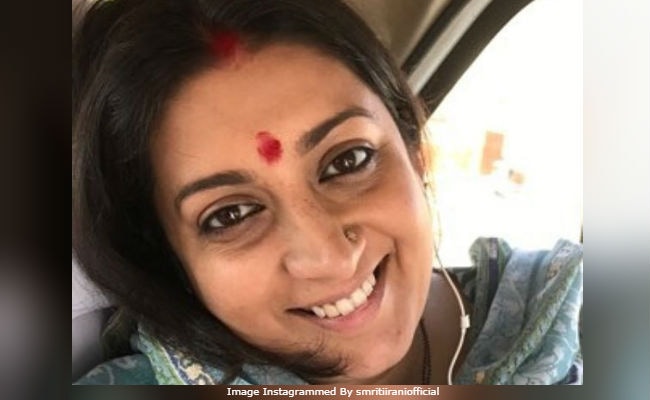 New Delhi: A comment on an Instagram post Smriti Irani shared last night reads, "Sometimes I doubt you are a minister, you are so normal like a common man." Whether or not the actress-turned-politician qualifies as a 'common man,' she did share this one common experience with the rest of us - at least, most of the rest of us. Smriti Irani, minister of Information and Broadcasting, sat patiently through the end credits of Avengers: Infinity War rolled, waiting for the post-credits scene. "You know you are an Avengers fan when the credits roll and you still wait for the post-credits scene," Ms Irani revealed on Instagram. Ms Irani, who has a teenaged son and daughter, didn't say who she was watching the film with.

Her followers were instantly floored. "You are the coolest minister ever," read one comment - and the sentiment was repeated in several others. One sad comment from a resident of Jhansi complained about a cinema switching off as soon as the credits began rolling. "Please take action against this serious issue," the disappointed Avengers fan begged.

It's a good thing Smriti Irani stayed till the end because that post-credits scene is key to Avengers 4 (currently destroying the box office globally) - SPOILER (if you haven't watched the film yet, don't read any further). Before the credits roll, Thanos the Mad Titan halves the population of the universe, disintegrating several superheroes along with regular folks. After the credits roll, S.H.I.E.L.D agents Nick Fury and Maria Hill are also disintegrated on the streets of New York - but, and it's a big but, not before Director Fury manages to send out a red alert on an intergalactic beeper.

Promoted
Listen to the latest songs, only on JioSaavn.com
But who was the alert meant for? Who could be powerful enough to swoop in and rescue the decimated Avengers when some of the strongest heroes - Black Panther, Star-Lord and Spider-Man among them - fell to Thanos? The thrilling answer is Captain Marvel, a female air force pilot stuck in space with alien DNA melded with hers. Actress Brie Larson is onboard to play Captain Marvel who, at some point in the comic books, absorbs the powers of a binary star.

If that's not badass and not worth waiting through a few minutes of credit roll for, we don't know what is.
Comments
Smriti IraniAvengers: Infinity War