In one of the clips, Shehnaaz can be seen wishing Sidharth in her own quirky style 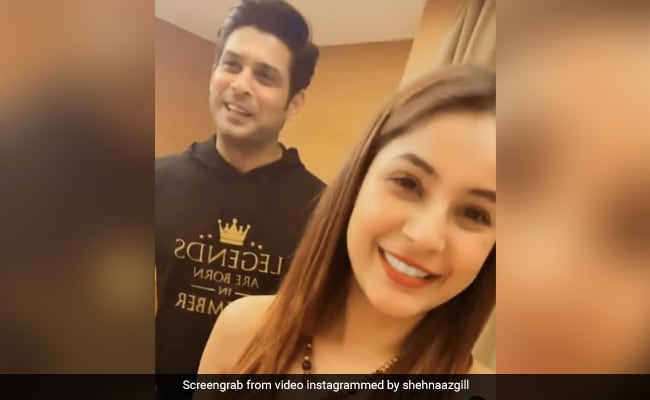 Bigg Boss 13 winner Sidharth Shukla turned 40 on Saturday. The actor celebrated his birthday with singer Shehnaaz Gill, who was the second runner-up in Bigg Boss 13. The duo occupied a spot on the list on trends on Saturday after a video of Sidharth cutting his birthday cake with Shehnaaz surfaced on the Internet. For the unversed, Sidharth and Shehnaaz share a close bond. The singer even confessed her love for the actor a couple of times on Salman Khan's reality show. They often feature in headlines for their rumoured relationship but they have maintained that they are just best friends.

Videos from Sidharth Shukla's birthday celebrations have gone viral on social media. In one of the clips, Shehnaaz can be seen wishing him in her own quirky style.

Take a look at the viral videos here:

Sidharth Shukla and Shehnaaz Gill have also featured together in a couple of music videos, after Bigg Boss 13 concluded. The title of one track is Bhula Dunga while the other one is Shona Shona.

In terms of work, Sidharth Shukla became a household name after he featured in Balika Vadhu: Kacchi Umar Ke Pakke Rishte. He has also participated in reality shows such as Fear Factor: Khatron Ke Khiladi 7 and Jhalak Dikhhla Jaa 6. He has starred in many films, including Shashank Khaitan's Humpty Sharma Ki Dulhania co-starring Alia Bhatt and Varun Dhawan.

Shehnaz Gill, on the other hand, has featured in several Punjabi music videos and films.