"My dad told me that I should always chase my dreams," said Siddhant Chaturvedi 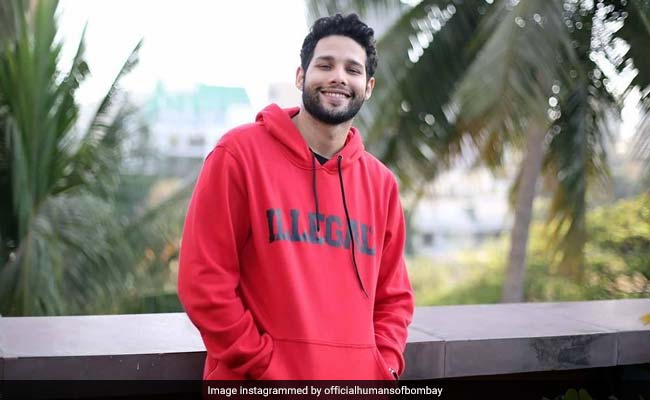 Actor Siddhant Chaturvedi believes that his father is his true MC Sher. In his piece for Human Of Bombay, Siddhant opened up about his journey from being an aspiring actor to becoming a household name and how his father supported him through thick and thin. In his post, Siddhant recalled how at the beginning of his career, he faced rejections during auditions but his father always stood by him. Siddhant wrote: "My dad became my true MC Sher. He said, 'be patient, you don't have to undersell yourself ever.' He had my back, he told me that I should always chase my dreams, and he will give me food and a roof so that I could do what I wanted. He gave me the freedom to decide, to dream." As any Gully Boy fan would know, MC Sher was a mentor to Ranveer Singh's character Murad, who helped him in becoming a renowned rapper (hence, the MC Sher reference).

In his post, Siddhant made an interesting revelation. Did you know that Zoya Akhtar asked Siddhant to audition for MC Sher's role during the success bash of the web-series Inside Edge, which marked the 25-year-old actor's debut in the entertainment industry.

"So after 4 years of struggle, with more auditions and more rejections, I started building contacts. Then Inside Edge happened because the makers had a vision which my acting fit into. I showed them I could perform, and got the part! After which - I met Zoya Akhtar at the success party and danced with her on Gallan Goodiyan, and as fate would have it, she asked me to audition for the role that changed my life," read an excerpt from the Humans Of Bombay post.

"My father has always been fond of Cinema, so he'd take me to watch movies every Friday & my love affair with Cinema began. My dad would play Salman songs on tape & I'd dance! I even had Shahrukh's 'COOL' necklace! I was always inclined towards art-the first poem I wrote was for a girl in 9th grade. She turned me down, but I continued writing, not knowing where it'd lead. Still, my primary career option was to become a CA, like my father! So I studied, never once thinking about acting. That seed was planted when in college, I got into the drama team. I realised I loved it! But I had to leave it to focus on my CA exams. Between college & my classes-I barely slept! But I knew I had to finish my education- I was doing it for the heck of it, but once I started, I needed to reach that finish line. So I cleared my exams, just 15 marks away from the rank! If you ask me, what my biggest achievement is-it's not acting. I knew I'd achieve that, but it's passing my exams, because that's something I never wanted to do. Later, before my finals, I asked my dad for time to focus on acting. I'd go with my friends to auditions. In my first audition, they told me to 'learn how to look at the camera first & then come back.' But through it all, my dad was my true MC Sher. He said, 'be patient & don't undersell yourself ever, to always chase my dreams & he'll give me food & a roof so that I could do what I wanted. He gave me the freedom to decide & dream. So after 4 years of struggle, with more auditions & more rejections, Inside Edge happened. Because the makers had a vision which my talent fit into! After which- I met Zoya Akhtar at the success party & danced with her on Gallan Goodiyan. As fate would have it, she asked me to audition for Gully Boy, for the role that changed my life. After the release, I received a letter from Mr. Amitabh Bachchan himself & when I handed that over to my father, the biggest Bachchan fan, it was the best moment of my life. His face said it all. Plus I can never get tired of already being remembered for Sher-I can now truly roar, ;!"

Siddhant also spoke about he handed over Amitabh Bachchan's handwritten-note to his father and said that it was the "best moment of his life." He added, "After the movie released, I even received a letter from Mr Amitabh Bachchan himself and when I handed it to my father, the biggest Bachchan fan I know, that was the best moment of my life. His face said it all."

Siddhant had received a special hand-written note and a bouquet from Amitabh Bachchan, pictures of which he posted on his Instagram profile last week.

Siddhant Chaturvedi stepped into the Indian entertainment industry with the 2016 web-series Inside Edge. He also featured in the web-series Life Sahi Hai.