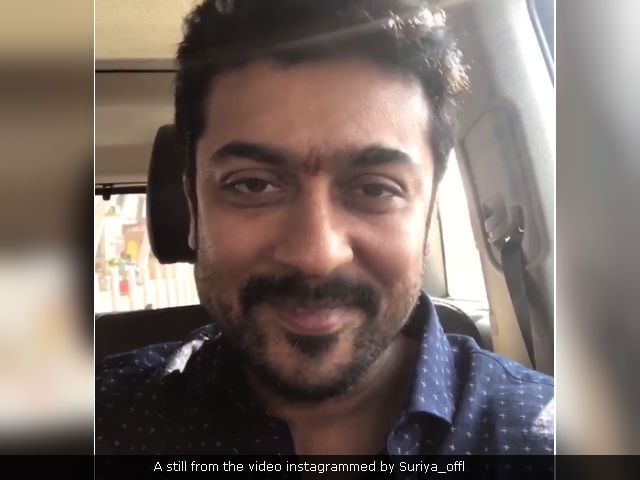 New Delhi: Actor Suriya is excited to share his latest action film Singam 3 with the audience. The Hari-directed film hits the screens today and Suriya shared a message for fans on social media. "Hello all. It's an important day for all of us. I can see a lot of love, lots of prayers and support. With all your positivity, I am hoping that Singam 3 will satisfy all of you. Thank you for your blessing and love. We request, please do support Singam 3 in theatres," Suriya said in the video message. Last week, a Tamil website said they'd stream the action drama film on the day of its release and Suriya urged fans to not let piracy win.

In an interview to the First Post, Suriya said: "I will be happy if the youth of my state/country come together and say 'NO' to watching films online for free. It is my sincere appeal to those wanting to watch Si3 FDFS or in the first week itself, please come to the theatres, there's ample reason in this film as to why you should."

Singam 3 or Si3 is the third film in the series and takes forward the story of a brave and righteous cop Durai Singam. The film also stars Anushka Shetty and Shruti Haasan in pivotal roles. As the actors gear up for critics and audience's reviews of the film, the industrywallahs wished him luck.

Promoted
Listen to the latest songs, only on JioSaavn.com
Here's a sample:

Best wishes my friend @Suriya_offl#Si3FromToday ... have a Blockbuster outing at the cinemas. https://t.co/y0ryvvbxQJ

Best wishes to the team of #Si3 for a grand release today god bless. @Suriya_offl#dirHari

Wishing @Suriya_offl all the best for #Singam3 , wishes to Dir Hari and team.Spl wishes to producer.

Singam is quite a blockbuster series and was adapted in Hindi by Rohit Shetty with Ajay Devgn in titular role.