Shweta will soon be a published author like her grandfather. Amitabh Bachchan also writes poetry but none have been published so far 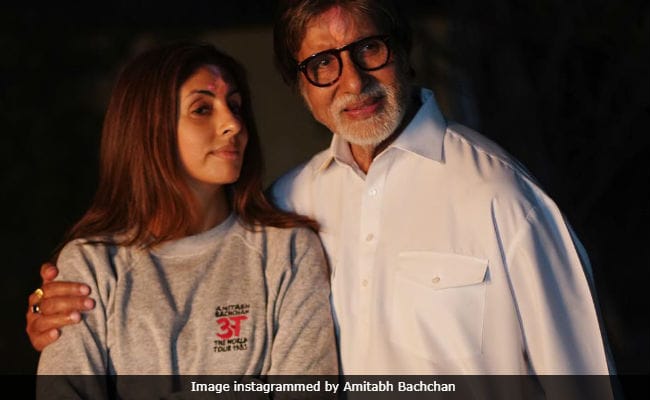 Amitabh Bachchan with his daughter Shweta in Mumbai. (Image courtesy: Big B)

New Delhi: Amitabh Bachchan is glad because finally his father Harivanshrai Bachchan's "legacy found a reflection in his family" - Big B's daughter Shweta Bachchan Nanda will soon become a published author. Shweta's debut novel, titled Paradise Towers, will hit the bookshelves in October. Mr Bachchan was overwhelmed. He shared a snippet of the announcement by the publishers and wrote: "The proudest - father... My daughter the best and greatest." Shweta is the elder of Amitabh Bachchan and Jaya Bachchan's two children. Their son Abhishek opted for a career in films like his parents. Their daughter-in-law Aishwarya Rai Bachchan is also an actor. Though Mr Bachchan writes poetry, none have been published so far. Shweta will be the second bona fide writer in the Bachchan family after Harivanshrai Bachchan (though not a poet like her grandfather).

In a Facebook post, the publisher of Shweta's novel described Paradise Towers "as a heart-warming slice-of-life novel set in a Mumbai apartment."

THE PROUDEST-FATHER .. my daughter the best and GREATEST !!

Shweta Nanda is married to businessman Nikhil Nanda and they are parents to Navya Naveli and Agastya. The family of four stays in Delhi but Shweta is frequently spotted in Mumbai at her parent's place. Shweta was recently in town to celebrate her mother Jaya Bachchan's birthday. Mr Bachchan shared this photo from the celebration.

Though Shweta did not think about a career in films, she did walk the ramp for designers Abu Jani and Sandeep Khosla in 2016. At that time, Shweta told NDTV that she has "always been the shy member of the family."

The Bachchans are a busy lot - Amitabh Bachchan is awaiting the release of 102 Not Out and he's filming Thugs Of Hindostan and Brahmastra. Abhishek Bachchan is making Manmarziyaan with director Anurag Kashyap. Aishwarya Rai Bachchan is currently making Fanne Khan.